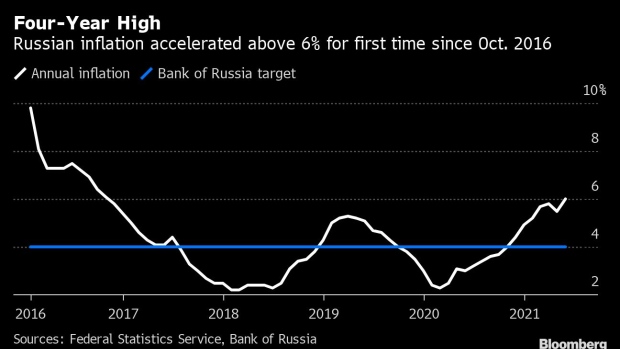 The obverse, right, and reverse sides of 2014 issue Russian one ruble coins sit in this arranged photograph in Moscow, Russia, on Tuesday, Aug. 5, 2014. Russian government bonds slid, taking yields to a five-year high, and the ruble fell on concern the conflict in Ukraine will escalate after Poland warned President Vladimir Putin may be preparing to invade. Photographer: Bloomberg/Bloomberg , Photographer: Bloomberg/Bloomberg

(Bloomberg) -- Bank of Russia delivered its third straight increase in interest rates as a recovery from the pandemic combined with a surge in global food prices to accelerate inflation faster than expected.

The benchmark rate was raised to 5.5% on Friday, the highest level in more than a year, the Bank of Russia said in a statement. The move was forecast by 30 of the 36 economists polled in a Bloomberg survey. The rest expected a smaller hike.

Governor Elvira Nabiullina is battling a surge in consumer prices that has pushed annual inflation above 6% for the first time in more than four years. The central bank has increased interest rates by 125 basis points since March but consumer price growth is still well above a 4% target.

Nabiullina will hold an online news briefing at 3 p.m. Moscow time. Follow the event on our live blog here.