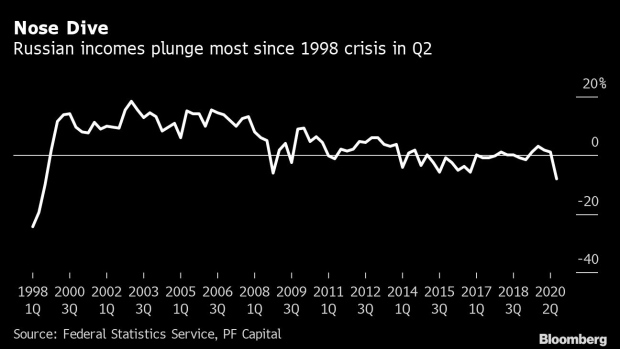 Social distancing markers sit on the ground on a platform at a Moscow Metro station in Moscow, Russia, on Monday, June 1, 2020. With Russia's economic activity declining by a third during a two-month nationwide lockdown to limit the spread of the coronavirus epidemic, the Kremlin is now seeking to limit the fallout. , Bloomberg

(Bloomberg) -- Russian incomes in the second quarter plunged by the most since the country’s 1998 default as the economy of the world’s biggest energy exporter took a double blow from the pandemic and slump in global oil demand.

Real disposable incomes fell 8% between April and June compared with a year ago, the Federal Statistics Service reported Friday. Data for the first quarter, which earlier showed a drop, were revised up to a 1.2% increase.

“This situation with incomes is pointing to a lot of problems,” said Evgeny Nadorshin, chief economist at PF Capital in Moscow. “If incomes don’t recover, the economy may also fail to bounce back.”

The slump, which follows years of falling or stagnating living standards, is one of the biggest challenges faced by President Vladimir Putin as he paves the way to extending his two-decade rule. The coronavirus upended a plan to boost spending on social projects this year, with completion of the so-called National Projects likely pushed back until 2030.

The plunge hammered retail sales, which fell 7.7% in June after a 19% drop in April. Wages rebounded in May after a drop in April, climbing 1%. Unemployment edged up to 6.2% in June from 6.1% in May.

“The worst is over, but the rebound in demand faces a low ceiling until the virus is under control. Even then, persistent weakness in incomes is likely to weigh on consumption.”

Industrial production contracted for a third month in June even as lockdown measures were being lifted in many regions, falling 9.4% from a year before, after a 9.6% drop in May, the statistics agency reported Thursday. The economy overall may shrink 6% this year, according to the World Bank.