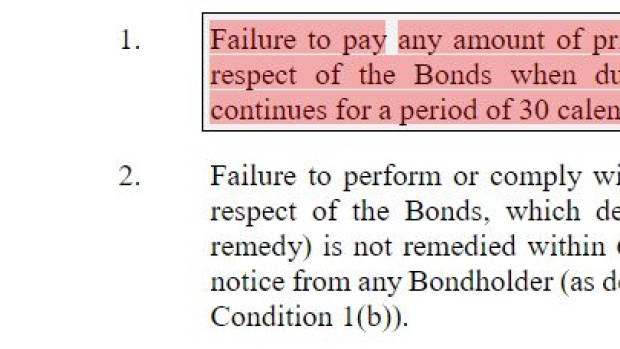 (Bloomberg) -- After months of teetering on the edge of default, Russia is now just hours away from a dramatic moment in the financial battle that the US and others have waged against the Kremlin over its invasion of Ukraine.

A grace period on about $100 million of missed bond payments -- blocked because of wide-ranging sanctions -- ends on Sunday night. There won’t be an official declaration, and Russia is already disputing the designation, but if investors don’t have their money by the deadline, there will be an “event of default” on Monday morning, according to the bond documents.

It’s largely a symbolic development for now, given that Russia is already an economic, financial and political outcast across most of the world. But it showcases how the US, Europe and others have tightened the screws since the invasion started in February to make it all-but impossible for Russia to conduct what would otherwise be normal financial business.

For Russia, it will mark its first foreign default since the Bolshevik repudiation of Czarist-era debts in 1918. The country tipped very near to such a moment earlier this year, but managed a last-ditch escape by switching payment methods. That alternative avenue was subsequently shut off in May -- just days before the $100 million was due -- when the US closed a sanctions loophole that had allowed American investors to receive sovereign bond payments.

Now the question is what happens next, as markets are faced with the unique scenario of a defaulted borrower which has the willingness and resources to pay, but can’t.

Major ratings agencies would usually be the ones to issue a default declaration, but sanctions bar them from Russian business. Bondholders could group together to make their own statement, but they may prefer to wait to monitor the war in Ukraine and the level of sanctions as they try to figure out the chance of getting their money back, or at least some of it.

“A declaration of default is a symbolic event,” said Takahide Kiuchi, an economist at Nomura Research Institute in Tokyo. “The Russian government has already lost the opportunity to issue dollar-denominated debt. Already as of now, Russia can’t borrow from most foreign countries.”

As the penalties on Russian authorities, banks and individuals have increasingly cut off payment routes, Russia has argued that its met its obligations to creditors by transferring the May payments to a local paying agent, even though investors don’t have the funds in their own accounts.

Earlier this week, it made other transfers in rubles, despite the fact that the bonds in question don’t allow that payment option.

Finance Minister Anton Siluanov has cited “force-majeure” as a justification for the currency switch, calling the situation a “farce.” The legal argument of force majeure hasn’t historically encompassed sanctions, according to lawyers who spoke to Bloomberg earlier this month.

“There is every ground to suggest that in artificially barring the Russian Federation from servicing its foreign sovereign debt, the goal is to apply the label of ‘default’,” Siluanov said Thursday. “Anyone can declare whatever they like and can try to apply such a label. But anyone who understands the situation knows that this is in no way a default.”