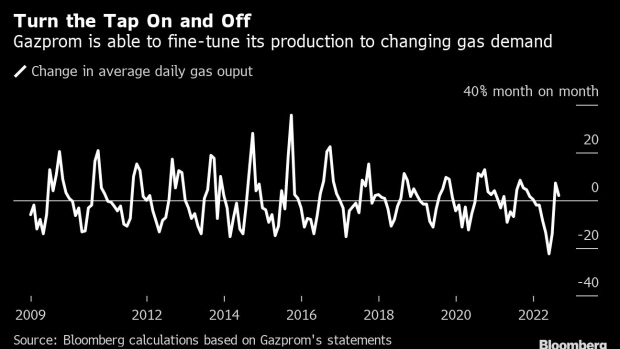 A gas flare burns at the central processing plant for oil and gas in the Salym oilfields, operated by Salym Petroleum Development NV, near Surgut, Russia, May 17, 2012. The Salym fields in western Siberia are operated jointly with Royal Dutch Shell Plc. , Bloomberg News

(Bloomberg) -- The economic impact of Russia’s gas shutoff is dominating European politics, but there are also concerns about the environmental consequences.

Officials from the bloc fear that Gazprom PJSC could be burning off fuel at its fields instead of exporting it to Europe. The evidence indicates those concerns are unfounded.

Surplus Russian gas is staying below the Siberian permafrost because the country’s fields have the flexibility that allows Gazprom to turn flows up or down as required, according to satellite data, industry analysts and the company’s historical figures.

As the rift between the Kremlin and the west deepened after the invasion of Ukraine, Gazprom slashed its total deliveries to key foreign markets by 39% between January and mid-September. The deliberate rupturing by persons unknown of three halted pipelines that used to deliver Russian gas to Germany suggests the reduction in exports could be long lasting.

The amount of gas observed being flared -- burned off into the atmosphere -- at Gazprom’s key production area in the Yamal peninsula between Aug. 10 and Sept. 21 averaged 1.18 million cubic meters a day, according to Bloomberg calculations based on satellite data analyzed by the Earth Observation Group at the Payne Institute for Public Policy, of the Colorado School of Mines.

That’s nearly 28% below flaring levels observed in the area over the same period a year ago, the calculations show. It is above the average from the same timeframe in 2020, which was slightly more than 1 million cubic meters a day.

Gazprom’s Yamal flaring “trend has not changed in the past several months,” said Dr. Mikhail Zhizhin, researcher at Payne Institute for Public Policy, who analyzed the data.

The observed flaring volumes are just a tiny fraction of Gazprom’s daily production, which averaged 838 million cubic meters from August through to mid-September. Output was down by 473 million cubic meters per day from the same period a year ago as exports to Europe were squeezed, Bloomberg calculations show. The producer’s daily shipments to key markets dropped by 302 million cubic meters compared to August-September 2021.

The flaring figures are based on night-time data from satellites measuring high radiant emissions associated with gas flares. The night-time detections are validated against daytime satellite images, as well as geographical and geological meta-data published by Russian oil and gas producers and governmental agencies. Cloudy nights limit detection of flares.

Even with the relative stability of flaring at Gazprom’s key gas production areas, Russia is still indisputably the worst offender when it comes to burning off gas into the atmosphere, according to data from the World Bank. The nation flared a total of 25.4 billion cubic meters of gas last year, the data show.

The Yamal peninsula is home to Gazprom’s largest fields, including the giant Bovanenkovо project that alone pumps over 20% of the producer’s total gas output. Yamal has been the main source of Russian gas supplies to Europe, which have been throttled since May as the Kremlin’s relationship with the West deteriorated over the invasion of Ukraine.

Demand for natural gas has always been seasonal in nature, driven to a large extent by the need for heating in winter. Gazprom “has demonstrated that they could deal with higher balancing requirements without damaging fields’ productive capacities” said Vitaly Yermakov, senior research fellow at the Oxford Institute for Energy Studies.

Gazprom did not respond to a request for a comment.

“Due to the uneven consumption patterns, Gazprom has to change its production significantly on monthly basis every year,” said Vyacheslav Kulagin, head of department at the Energy Research Institute in the Russian Academy of Sciences.  “Gazprom’s several major upstream projects function like gas cylinders, where the tap is sometimes opened to the full, and sometimes significantly turned down.”