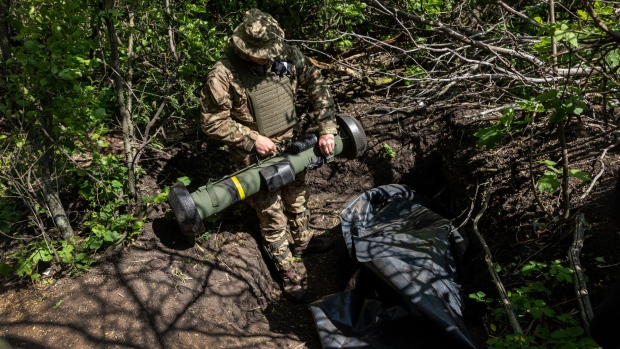 The ship’s journey to the Black Sea port of Novorossiysk underlines the Kremlin’s efforts to tap resources for the invasion that’s now in its sixth month, as supply lines strain under the pressure of Europe’s largest military campaign since World War II.

While Ukraine has received billions of dollars of weapons from the US and Europe to help defend itself, Russia must rely on its own resources to support frontline forces amid reports of extensive losses. Tens of thousands of Russian troops have been killed or wounded and thousands of armored vehicles destroyed, according to US estimates.

An official familiar with the matter said the US government believed Russia has been using merchant vessels to move military cargo to the Black Sea, echoing the European intelligence reports. The official asked not to be identified discussing confidential matters.

The Sparta II almost certainly brought military vehicles from Syria’s Tartus port that’s used by Russia, according to the intelligence officials and July 17-25 satellite imagery seen by Bloomberg. They said the exact nature of the vehicles was unclear. The ship was seen in Syria with vehicles in its hold, spotted crossing the Bosphorus Strait and later identified in Novorossiysk with at least 11 vehicles it was likely offloading.

Maritime tracking data show the ship owned by a company the US sanctioned in May that’s controlled by the Russian Defense Ministry made the journey on those dates, apparently unhindered by NATO member Turkey.

Ankara invoked the Montreux Convention to close the strait to warships soon after Putin’s Feb. 24 invasion, though commercial shipping can pass through. Russia used cargo ships from the company, Oboronlogistika OOO, on the same route on other occasions this year, according to the people. It has ferried military cargo multiple times from Russia to Syria in the past.

A US State Department spokesperson referred queries on the matter to the Turkish government. A Turkish official familiar with the issue said a merchant ship would only be examined if there was a tip-off or suspicion of wrongdoing. A White House spokesperson declined to comment on whether the US has spoken with Turkish officials about the situation. The Kremlin and Oboronlogistika didn’t immediately respond to requests to comment.

To be sure, Russia built up massive stockpiles of armaments during a decade-long modernization program overseen by Putin, and Kremlin officials deny any resupply problems. Still, US and European officials say the loss of large numbers of tanks and armored personnel carriers is forcing Moscow to dip into stocks of older equipment, including decades-old T-62 tanks.

Like Russia, Ukraine hasn’t disclosed the scale of its military losses though it has faced logistical challenges against a much larger foe, particularly earlier in the war. President Volodymyr Zelenskiy said in a July 22 interview with the Wall Street Journal that battlefield casualties had fallen to about 30 per day from a high of 100-200 daily in May-June, a number that has not been independently verified.

Putin has had troops in Syria since ordering a 2015 operation to shore up its embattled President Bashar al-Assad. Russian Defense Minister Sergei Shoigu in 2017 said the military tested more than 160 types of advanced weaponry there including fighter jets, laser-guided missiles, tanks, electronic warfare methods and air-defense systems.

There are indications the Kremlin has looked elsewhere for additional resources, too.

Tensions have flared between Armenia and Azerbaijan over the disputed Nagorno-Karabakh region in recent weeks amid reports denied by Moscow that Russia has thinned out a peacekeeping force of up to 2,000 troops to send to Ukraine. The US in March said Russia had diverted some troops to Ukraine from Georgia’s breakaway region of South Ossetia, where it’s kept thousands of soldiers since fighting a 2008 war.

Russia is turning to Iran to try to buy armed drones, CIA Director William Burns told a US security forum last month, saying it indicated “the deficiencies of Russia’s defense industry today, and the difficulties they’re having after significant losses.”

North Korea may become an unlikely new source of artillery as it has systems of a decent quality and last month recognized the Kremlin-controlled Donetsk and Luhansk people’s republics in eastern Ukraine as independent, according to one person with knowledge of Russian defense policy, asking not be identified discussing sensitive issues.

Russian shipments from Syria are likely feeding into its overall logistics as Novorossiysk is used to resupply bases in neighboring Crimea that Putin annexed in 2014, and from there to occupied Kherson and Zaporizhzhia in southern Ukraine, one of the European intelligence officials said. Russia has recently redeployed forces and equipment to the area as Ukraine threatens a counteroffensive in the Kherson region.

Russia moved a significant number of troops to Crimea in preparation for deployment in southern Ukraine and at least eight battalion tactical groups that comprise 800 to 1,000 soldiers were moved from the eastern Donbas region, adding to pressure on its logistical supply routes, the person said.

Rather than a large-scale offensive, Ukraine may be seeking to lure Russian forces to the Kherson area where they’ll be more vulnerable to attack, Phillips O’Brien, professor of strategic studies at the University of St. Andrews in Scotland, said Aug. 7 on Twitter. “Moreover, the supply issue for the Russians is far trickier with rivers where bridges can be severed and only a few heavy rail lines,” he said.

The Pentagon says it has supplied $9.1 billion in defense assistance to Ukraine since February, including $1 billion announced Monday to boost supplies of  long-range artillery munitions, anti-tank weapons and medical vehicles. The government in Kyiv has also received billions more in weapons from the UK and other North Atlantic Treaty Organization allies.

“Western arms shipments are allowing Ukraine to strike bridges, which is complicating logistics and supplies,” said Igor Korotchenko, head of the Moscow-based Center for Analysis of World Arms Trade. “Still, artillery and attack aircraft are the key weapons in our current offensive and we don’t have any shortages of either.”

As many as 80,000 Russian troops have been killed or wounded in the war, US Undersecretary of Defense for policy Colin Kahl said Monday at a regular Pentagon briefing. The US assessment was also that Russia had used up a significant percentage of its precision-guided munitions including air- and sea-launched missiles and lost as many as 4,000 tanks and other armored vehicles, he said.

“A lot of that is because of the anti-armor systems like Javelin, like the AT4, but also frankly because of the creativity and ingenuity in the way the Ukrainians have used those systems,” he said.

Putin hasn’t sought to bolster his military by ordering a mass mobilization, likely because that would risk forcing the Russian public to confront the costs of a war he’s kept at arm’s length from them so far. But regional officials have offered cash incentives to encourage people to volunteer on short-term contracts, while the lower house of parliament in May abolished an upper age limit for army service.

Russian military systems lean on microelectronics components designed and produced in the US, Europe and east Asia, according to a new report from the Royal United Services Institute in London, based on an examination of the remains of equipment used in Ukraine.

Even as it seeks to shore up its army on the battlefield, Russian gains in the east of Ukraine have continued to be extremely limited and slow in recent days, according to the intelligence officials.

Vasily Kashin, a Russian military expert at Moscow’s Higher School of Economics, said nations shouldn’t underestimate Russia’s resources. But he said importing weapons might still be worthwhile, noting North Korea has long-range multi-launch rocket systems that are “more powerful than those that Russia has.”

“Of course Russia has some problems on the battlefield, but we see no proof that it imports any weapons for its war against Ukraine” he said. “However, it might be worth doing.”