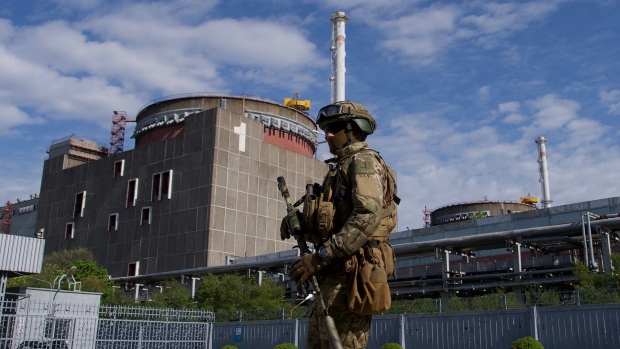 (Bloomberg) -- Russia is likely using the Zaporizhzhia nuclear power plant in southern Ukraine to shield its troops and equipment, undermining the safety of the plant’s operations, according to European intelligence officials.

There appears to be a deliberate effort by Russia to use the plant’s protected status as a nuclear site to provide cover to its forces, and prevent them from being attacked by Ukrainian forces, a tactic that undermines the security of the plant, said the officials, who asked for anonymity to discuss sensitive information.

Russia has also used the wider area to rest its forces at night, and has launched long-range artillery attacks from adjacent regions, the people said, adding that it doesn’t appear that significant strikes have been launched from within the facility so far.

Russian forces captured the Zaporizhzhia plant, Europe’s largest nuclear facility, in March. The UN’s International Atomic Energy Agency has warned in recent days of a real risk of nuclear disaster at the facility. Moscow has been stalling international calls to grant inspectors access to the plant.

This week, the US, European Union, UK and other allies issued a joint statement warning that the “deployment of Russian military personnel and weaponry at the facility is unacceptable and disregards the safety, security and safeguards principles that all members of the IAEA have committed to respect.”

Ukraine’s president Volodymyr Zelenskiy said in his regular evening address to the nation that he spoke about the plant’s security with UN Secretary General Antonio Guterres on Thursday.

“There are no objective obstacles to prevent the IAEA mission from reaching the Zaporizhzhia nuclear power plant. Today, Mr. Guterres and I discussed the parameters of this mission and the fact that it can get to the plant very quickly and quite safely in a legal way through the free territory of our state,” Zelenskiy said. “Russia must immediately and unconditionally allow IAEA representatives to the plant and also immediately and unconditionally withdraw its troops from the territory of the plant.”

European intelligence has also assessed that Russia is likely to continue to spread disinformation falsely painting Ukraine’s actions toward the plant as reckless, the officials said. Russian state Twitter accounts have repeatedly accused Kyiv of targeting the facility, including with western weapons, and Moscow has warned of unsubstantiated false-flag operations.

The officials said that the plant’s nuclear reactors are well protected by large steel and concrete blocks, which would probably provide some protection from accidental strikes. Any damage to the reactors would likely be due to them being deliberately targeted, they added.

Russia’s goals for the plant are unclear, the officials said, but Moscow could use the energy it produces as a bargaining chip with Kyiv.