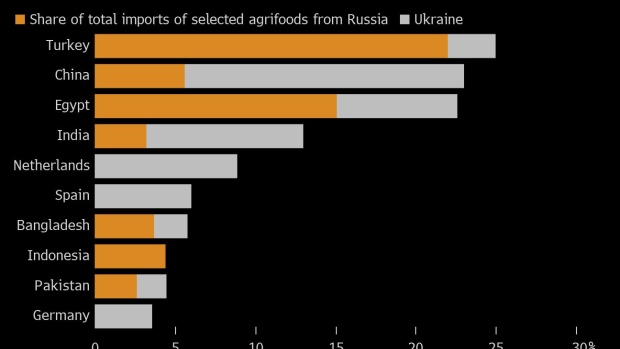 Russia has continued to ship its wheat at the now-higher price. Photographer: Andrey Rudakov/Bloomberg , Bloomberg

(Bloomberg) -- Russia’s war against Ukraine, while deepening a global food crisis, has made the invader among the biggest winners of the mess it helped create.

The war has blocked Ukraine’s grain exports by sea, cutting off vital supplies for countries from Somalia to Egypt. The disruption, topped by hot weather and droughts that are hurting wheat crops in other parts of the world, has sent prices of the grain to near-record highs and is threatening hunger in parts of the Middle East and North Africa.

Russia has continued to ship its wheat at the now-higher price, finding willing buyers and raking in more revenues per ton. It is also expecting a bumper wheat crop in the next season, suggesting it will continue to profit from the situation. Global wheat prices have risen by more than 50% this year, and the Kremlin has collected $1.9 billion in revenues from wheat export taxes so far this season, according to estimates from agricultural consultant SovEcon.

“This is using food as a weapon of war through global leverage rather than directly attacking a population,” said Tim Benton, Research Director for Emerging Risks at Chatham House, alluding to Russian comments that it would only unblock the Ukranian port of Odesa if sanctions are relaxed.  “From a political perspective we are in a kind of new place because of the importance of grain markets.''

By blocking Ukraine’s ports, Russia has forced that country to try and ship grain by land, resulting in exports of only about a quarter of its usual potential volumes.

“Failure to open up the ports is a declaration of war on global food security,” David Beasley, the head of the United Nations’ World Food Program, said at the World Economic Forum in Davos on Monday. Beasley said the lack of access to food may spur millions of people to migrate.

Every 1% increase in hunger results in a 2% increase in migration, he said, noting that 49 million people were “knocking on famine’s door” in 43 countries. “Those are the 43 countries we’ve got to be extremely concerned about that will result in destabilization and mass migration if we don’t get ahead of this,” he said.

Russia and Ukraine are major suppliers of wheat and sunflower oil to the world. Ukraine also ranks among the top six exporters of corn, chicken and honey. It has traditionally shipped millions of tons of grains a year via the Black Sea, earning about 10% of its gross domestic product from its agriculture and food sector. The two are among the few countries in the world that export big volumes of the food they grow to many countries.

While Russia ran into some short-lived problems immediately after the invasion, it’s now delivering its agricultural produce at a faster pace than last year — with international traders like Viterra and Cargill still making shipments. It even shipped some volumes to Israel, which often buys from Ukraine, according to AgFlow. Russian wheat shipments for the 2021-22 season totaled 34.1m tons as of this week, down 11% from a year earlier, Interfax reported.

Russia has also effectively sidelined a key competitor, said Hugo Boudet, an analyst at AgFlow, noting that between April 1 and May 23 Russia significantly boosted its shipments of grain to countries including Turkey and Iran compared to last year. “Ukraine had been the main competitor,” he said. “You put this together and Russia has a big advantage in this area because of there being less competition’’ and crop production dwindling in 2022 in the Middle East and North Africa. “A lot of people talk about bans on Russian goods, but the fact is these importing countries did not take any direct action against agricultural goods from Russia.”

The current trends are likely to last for the foreseeable future. In Ukraine, farmers have been planting for the next season under the threat of bombs, and even clearing dead bodies from their land. For its part, Russia is expected to reap a record harvest in the new season thanks to good weather. In contrast, other big wheat suppliers from the US to Western Europe are seeing droughts that are threatening their crops. Russia has also dominated shipments of sunflower oil since the war began, after Ukraine's exports by sea were cut off.

“Food from the Russia perspective becomes an economic sector where it has political and economic leverage,” said Chatham House’s Benton. “Over the next years or so, you can imagine Russia saying, we grow lots of grain, we'll give it to you if you support us.”

Ukraine’s President Volodymyr Zelenskiy has said that Russia is stealing its grain in occupied regions. Two Ukrainian traders said that the Russian military confiscated grain and goods in occupied areas. Egypt refused to allow a shipment of undocumented Ukrainian wheat to land at its ports.

Kremlin spokesman Dmitry Peskov agreed that a food crisis is being created but blamed “those who imposed sanctions against us and the sanctions themselves that are in effect.” US and European sanctions do not explicitly target food exports, but some measures on banks have made financing more complicated. The cost of insuring and shipping Russian grain spiked after the invasion due to the sanctions and the risks have increased of sailing in the Black Sea, where some ships were hit by shelling at the beginning of the war.

While the Russian state’s coffers are swelling with commodity export revenues, its citizens are also suffering from rapid food-price rises. Russia may be self-sufficient in raw materials like grain and sugar, but it relies on imports for everything from packaging to processed food and essential flavorings and ingredients. Foreign companies from Nestle SA to Unilever Plc left or limited operations in Russia after the invasion. An initial wave of panic-buying after the war began may have subsided, but food inflation is at the highest since at least 2004.