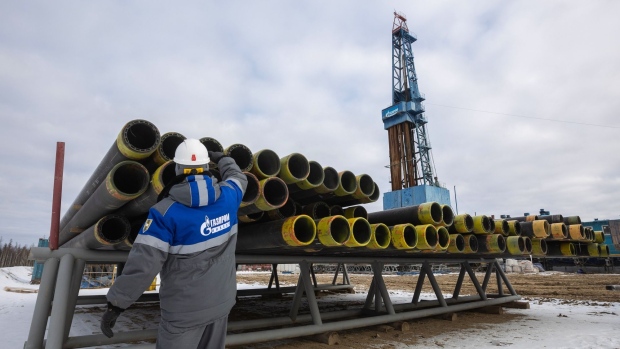 A worker inspects drilling pipes at a gas drilling rig on the Gazprom PJSC Chayandinskoye oil, gas and condensate field, a resource base for the Power of Siberia gas pipeline, in the Lensk district of the Sakha Republic, Russia, on Wednesday, Oct. 13, 2021. European natural gas futures declined after Russia signaled that it may offer additional volumes soon. Photographer: Andrey Rudakov/Bloomberg , Bloomberg

“Such a situation, at the end of the day, is leading to lower consumption, and this will affect our producers, including Gazprom PJSC,” President Vladimir Putin said at a government meeting Wednesday that was broadcast by Rossiya 24 TV. “This is why we are not interested in endless growth of energy prices, including gas.”

Benchmark gas prices in Europe, the main market for Russian exports of the fuel, have broken record after record in recent weeks, as capped pipeline supplies to the region and intense competition with Asia for liquefied cargoes have caused a supply shortage.

The crunch is driving up costs for businesses, household bills and even the price of food. Several European industries have seen large energy users curb operations that have become too expensive to run, including chemicals giant BASF SE and fertilizer producers CF Industries Holdings Inc. and Yara International ASA.

Putin and other high-ranking officials have been using verbal interventions recently as a mechanism for capping European gas prices and for reducing volatility in the market. So far, Russia hasn’t sent any significant additional gas volumes to the region’s spot market to ease the crunch, citing the need to prioritize domestic reinjections ahead of winter.

Gazprom’s exports to Europe have been lower year-on-year since late August, with some officials on the continent blaming the Russian producer for contributing to the crisis by intentionally withholding additional volumes. The company says it ships the fuel in line with requests from its long-term clients and some major utilities in the region, confirming they aren’t asking for more due to high prices.

Russia is completing its campaign to refill domestic gas inventories ahead of winter, with 97% of the planned volumes reinjected, Energy Minister Nikolay Shulginov told Putin at the government meeting.

“The injections will be 100% completed by November 1,” he said reiterating earlier statements by Gazprom officials. This year, the gas producer aims to fill the nation’s inventories to a record-high 72.6 billion cubic meters, or possibly even more.

The European market is closely watching the pace of Russian gas reinjections, eyeing a timeline for additional gas flows after the campaign is over. Gazprom may resume short-term sales of gas for export once it has refilled domestic inventories, Deputy Prime Minister Alexander Novak said last week. Still, the final decision lies with the Russian producer, which will take into account domestic supply, demand and requests from clients, he said.

Meanwhile, Russia expects record gas consumption at home this year, with its energy demand in the current heating season expected to be about 3% higher than in 2020, as the nation recovers from the pandemic. Given increased domestic demand, Gazprom, which so far in October has been pumping gas at some 95% of its peak winter capacity, will not necessarily have extra supplies for Europe this winter, according to BCS Global Markets.