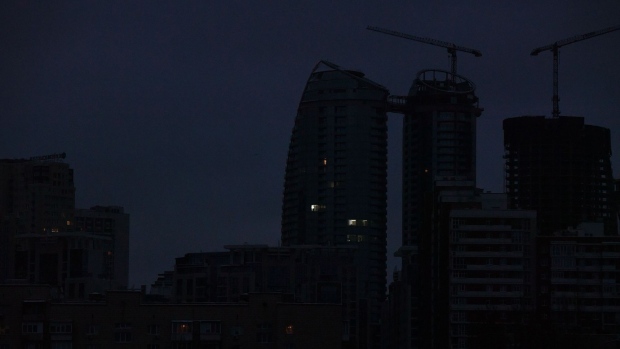 (Bloomberg) -- Ukraine restored electricity and other vital services to some areas, but most of the capital and other parts of the country remained in without power in the cold after another wave of Russian missiles targeted civilian infrastructure.

The relentless attacks threaten to trigger another refugee exodus to Europe and underscore Kyiv’s need for more increased air defenses.

“When it is freezing temperature outside and millions of people are cut off from electricity, heating and water as a result of Russia’s missile attack on energy facilities, it is a clear crime against humanity,” Ukrainian President Volodymyr Zelenskiy told the United Nations Security Council by video link after Wednesday’s barrage.

Russia’s envoy, Vasily Nebenzya, told the gathering the attacks will continue until Kyiv is forced to take a “realistic” approach to potential talks, saying the strikes were retaliation for US and European weapons supplies to Ukraine.

Power was still out in 70% of the capital, Kyiv, and half of residents lacked running water, mayor Vitali Klitschko said on Telegram. Emergency workers restored electricity to critical infrastructure in 17 of 24 regions of the country, officials said.

The barrage of about 70 missiles hit targets ranging from key energy facilities to a maternity ward, killing a newborn. The outages left mobile communication towers without power, causing internet connection slowdowns. Temperatures dropped below freezing in much of the country overnight.

Ukraine Latest: Most of Kyiv Left Without Power After Attacks

After suffering a series of battlefield defeats at the hands of Ukraine’s army, Moscow has turned to targeting energy in a bid to crush Ukrainians’ spirit and raise pressure from its allies to agree to talks.

With fighting expected to slow as winter weather makes it more difficult to cross obstacles such as muddy steppes, Ukrainians have remained defiant. Allies have stepped up supplies of anti-aircraft weapons, allowing Kyiv to shoot down many of Russia’s missiles. But the escalating misery has raised fears of a new wave of refugees that could overwhelm a Europe already struggling with surging costs of living, in part due to the war.

Ukrainian authorities enacted emergency blackouts and took three nuclear plants offline after rocket attacks knocked out power lines and left the reactors nowhere to transmit electricity. Even before the latest barrage, weeks of attacks had wrought more than $1.9 billion of damage to the grid, according to the state distribution utility, that will take considerable time to repair.

“It’s hard to run a modern society on fancy camping equipment,” said Joseph Majkut, the director of the Center for Strategic and International Studies’ energy security program. “This is a very cruel type of warfare and it portends a hard winter in Ukraine.”

The World Health Organization warned even before the latest strikes that millions of lives are at risk in Ukraine this winter due to damaged infrastructure that has left 10 million people, or around one quarter of the population, without power.

Zelenskiy’s administration has set up emergency points for residents to weather blackouts. US and European governments have supplied his government with generators and fuel. A particular challenge is trying to source the near obsolete auto-transformers that are needed in Ukraine’s Soviet-designed electricity grid, according to a European diplomat familiar with the discussions.

European Union officials have expressed concern that the devastation to the energy grid may touch off another exodus of refugees to the bloc, in addition to the millions of Ukrainians who’ve already fled and remain abroad to escape the war.

“The Russian strategy now seems to be to make those conditions so extremely horrible that people give in and maybe start putting pressure on the Ukrainian leadership to negotiate some sort of peace,” said Elisabeth Braw, a senior fellow at the Washington-based American Enterprise Institute.

Zelenskiy has ruled out negotiations with Russia until it withdraws forces from all of the country’s territories, including Crimea.

Ukraine and its allies have said Russia is likely to run out of missiles and there are signs that the Kremlin has had to dig deep into its inventories to keep up the attacks, using anti-ship and anti-aircraft missiles against ground targets.