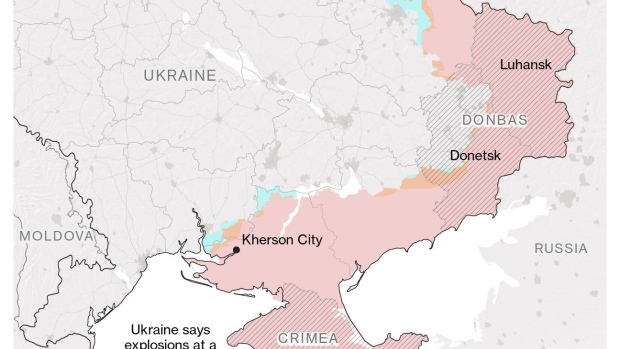 (Bloomberg) -- The Kremlin is considering the possibility of putting off votes to annex territories it’s taken in southern and eastern Ukraine as its military advances in the regions have stalled, a potential setback to Russia’s drive to cement its gains.

The referendums, originally targeted for next month, may be held as late as December or January because Russian troops haven’t yet been able to take full control of the areas the Kremlin seeks to claim as its own, according to people familiar with the discussions. The possibility of a delay was first reported Thursday by the Meduza news website.

For the moment, however, the Kremlin hasn’t abandoned hopes of holding the votes in September and preparations are continuing, the people said. Publicly, Russian occupation officials have said the dates will be set once the security situation allows it.

Though any vote would be rejected internationally as illegal, the Kremlin aims to use the referendums as a symbolic triumph for the domestic audience in Russia more than six months after the invasion began, signaling its determination to keep control over the land even as Ukraine vows to eject its forces.

Putin’s War in Ukraine at a Standstill, Western Officials Say

A similar referendum was conducted hastily in Crimea days before Russia annexed it from Ukraine in 2014. That vote hasn’t been recognized by any major country. Kyiv and its allies have denounced it as illegal and said any others the Kremlin has in the works would similarly be shams.

Russia’s battlefield advance, which has struggled for months in the face of fierce Ukrainian resistance, has largely stalled in recent weeks as Kyiv’s forces have expanded strikes behind Russian lines with new long-range weapons supplied by the US and its allies. Ukrainian officials have suggested a broader counteroffensive aimed at retaking lost territory may come in the autumn.

While Russia failed in the early days of the invasion to hold territory it took around the capital, Kyiv, its forces did expand control in the Donbas of the east and the Kherson and Zaporizhzhia regions to the south. Together, they provide a land link between the Donbas and Russian-occupied Crimea.

But Russian troops don’t control the full territory of any of those regions, while tens of thousands of residents have fled the fighting, potentially further complicating efforts to claim any kind of legitimacy for an annexation vote.

Even without the referendums, the Kremlin has moved to integrate the occupied lands, installing its own officials to run them, mandating the use of the ruble and rewriting school curricula to reflect its version of history.