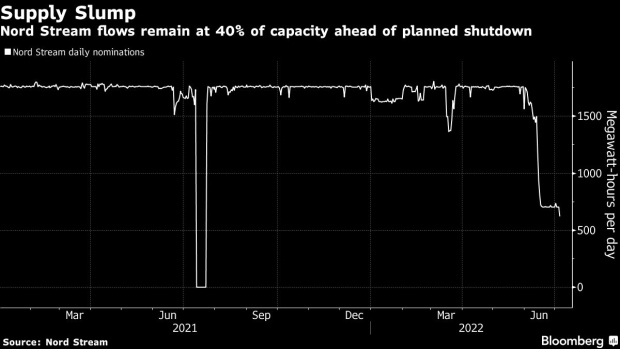 A pressure gauge on pipework at the Gazprom PJSC Slavyanskaya compressor station, the starting point of the Nord Stream 2 gas pipeline, in Ust-Luga, Russia, on Thursday, Jan. 28, 2021. Nord Stream 2 is a 1,230-kilometer (764-mile) gas pipeline that will double the capacity of the existing undersea route from Russian fields to Europe -- the original Nord Stream -- which opened in 2011. Photographer: Andrey Rudakov/Bloomberg , Bloomberg

(Bloomberg) -- A key Russian pipeline to Europe may not return to full capacity after planned maintenance this month, Goldman Sachs Group Inc. said, echoing the concerns of German officials.

Nord Stream 1 will shut for works on July 11-21, tightening a market that’s seen prices soar in recent weeks. With Russia having already slashed flows through the pipe to just 40% of normal levels, any move to withhold supplies for longer would severely hurt Europe’s efforts to refill stockpiles for winter.

“While we initially assumed a full restoration of NS1 flows following its upcoming maintenance event, we no longer see this as the most probable scenario,” Goldman analysts said in a note. The bank raised its gas-price forecasts for Europe into next year, citing increased risks to supply.

European gas is trading at the highest level in almost four months as consumers endure the worst energy crunch in decades, while once rock-solid utilities are struggling to stay afloat.

Germany, which relies on Russia for more than a third of its gas imports, said last month that the drop in flows through Nord Stream made it difficult to meet stockpiling targets, and expressed fears that the pipeline may not return to normal capacity following the scheduled works.

The International Energy Agency even warned Tuesday that a complete cutoff in flows “cannot be excluded” given Russia’s “unpredictable behavior.”

While Goldman sees a total halt in deliveries as unlikely -- since it would slash vital revenues for Moscow -- the bank raised its third-quarter forecast for benchmark gas futures to 153 euros a megawatt-hour. Prices could rise above 200 euros in a “worst-case scenario” for Nord Stream shipments, it said.

Front-month gas extended gains to trade above 170 euros on Tuesday as supply concerns were compounded by a shutdown of fields in Norway for strike action, and surging prices in Asia.