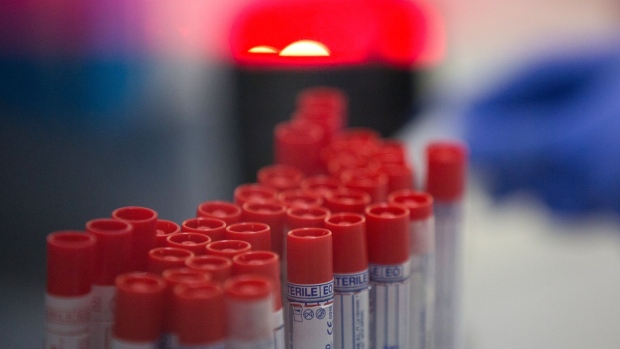 Test tubes containing samples from patients sit in a rack ahead of scanning during a swab testing process to identify Covid-19 at the Invitro LLC laboratory in Moscow, Russia, on Wednesday, April 15, 2020. President Vladimir Putin said at a teleconference with his top health officials Monday that the virus situation throughout Russia was deteriorating. Photographer: Andrey Rudakov/Bloomberg , Bloomberg

Russia plans to register a coronavirus vaccine as soon as Aug. 10 to Aug. 12, clearing the way for what its backers say would be the world’s first official approval of an inoculation against the epidemic.

The drug developed by Moscow’s Gamaleya Institute and the Russian Direct Investment Fund may be approved for civilian use within three to seven days of registration by regulators, according to a person familiar with the process, who asked not to be identified because the information isn’t public.

Earlier, the state-run RIA Novosti news service reported the vaccine may be approved by Aug. 15-16.

No data has been published about the vaccine, which has been touted by its developers as safe and potentially the first to reach the public. It is scheduled to begin Phase 3 trials next week in Russia, Saudi Arabia and the United Arab Emirates.

“Americans were surprised when they heard Sputnik’s beeping. It’s the same with this vaccine. Russia will have got there first,” Kirill Dmitriev, the head of RDIF, said in an interview with CNN.

Researchers and pharmaceutical companies in other countries including the U.S., the U.K., Japan and China are also racing to develop vaccines. AstraZeneca Plc, Moderna Inc. and Pfizer Inc. have begun late-stage testing for COVID-19 vaccines, with initial results from some of the human trials expected as early as October. Phase 3 tests typically take months to run in order to better understand a drug’s effectiveness.

The Russian vaccine will be provided to health professionals before clinical trials are complete, Health Minister Mikhail Murashko said in an interview with state television on Saturday. He and other officials have said the vaccine won’t be widely available before late in the year.

Scores of Russia’s business and political elite were given access to the experimental vaccine as early as April, according to people familiar with the effort. Military volunteers completed Phase 2 trials of the drug last week

Russia this week approved clinical trials for a second vaccine, developed by the Vector laboratory in Novosibirsk.