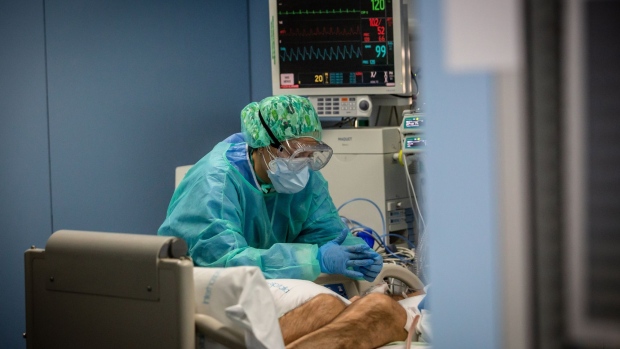 A medical worker wearing protective face mask, goggles and scrubs, tends to a patient on a ventilator diagnosed with Covid-19 on the intensive care unit (ICU) ward at the Sant Pau hospital in Barcelona, Spain, on Thursday, April 2, 2020. As it seeks to support the economy with aid for small and mid-sized companies, the Spanish government is also seeking a vaccine for the virus. Photographer: Angel Garcia/Bloomberg , Bloomberg

A Russian military hospital discharged the first group of 18 volunteers in a vaccine trial after a 28-day observation period, calling the initial phase a success, according to an emailed statement from the Defense Ministry.

The group had no health complaints, complications or adverse reactions to the vaccine, according to the statement. They will come back for further tests on the 42nd day after their first vaccination.

Earlier, the state-run Gamaleya epidemiology institute in Moscow said it conducted successful unofficial tests with a potential coronavirus vaccine among its staffers.

There’s a worldwide race to find vaccines capable of protecting people against the novel coronavirus that’s upended the global economy and forced many countries to adopt nationwide lockdowns against the spread of the deadly pathogen.

Scientists in Russia are developing 47 potential vaccines, according to officials.

Sberbank, Russia’s biggest lender, recruited about 200 volunteers among its employees in May for a human trial of one of Gamaleya’s vaccines.

In June, the Russian Direct Investment Fund said it may be possible to start mass production of a potential COVID-19 vaccine developed by Gamaleya by fall at a site owned by billionaire Vladimir Evtushenkov’s Sistema PJSC.

Russia has 746,369 confirmed coronavirus infections and has reported 11,770 deaths.