This energy surge is going to be persistent for the next 5 years: Patrick Horan

With winter fast approaching and a stunning energy price surge pummeling Europe, Russian President Vladimir Putin chose an opportune moment to use his country’s leverage as an oil and gas superpower.

On a chaotic day that saw European benchmark natural gas surge 40 per cent in a few minutes, Putin eased prices by offering to help stabilize the situation. Russia could potentially export record volumes of the vital fuel to the continent this year, he said. Dutch and U.K. gas futures plunged more than 7 per cent on his remarks after earlier hitting records, while U.S. prices for the fuel dropped 10 per cent. But spot liquefied natural gas in Asia still soared to an all-time high.

Quick certification of the controversial Nord Stream 2 natural gas pipeline would be one way to achieve this, according to Deputy Prime Minister Alexander Novak.

Nord Stream 2 lies completed under the Baltic Sea between Russia and Germany, but is tied up in a long, complicated and highly politicized permitting process. While Putin himself didn’t directly link additional supplies to approval the pipeline, he noted that another major route for Russian exports to Europe, Ukraine, was more expensive and polluting.

“Let’s think through the potential increase of supply on the market, only we need to do it carefully,” Putin said at a televised meeting on Wednesday.

In an interview with Bloomberg Television, U.S. Secretary of State Antony Blinken said Wednesday that the recent turbulence in European gas prices only underscores the need to transition to more sustainable forms of energy, and said he hoped Russia wouldn’t use its supplies as a weapon. 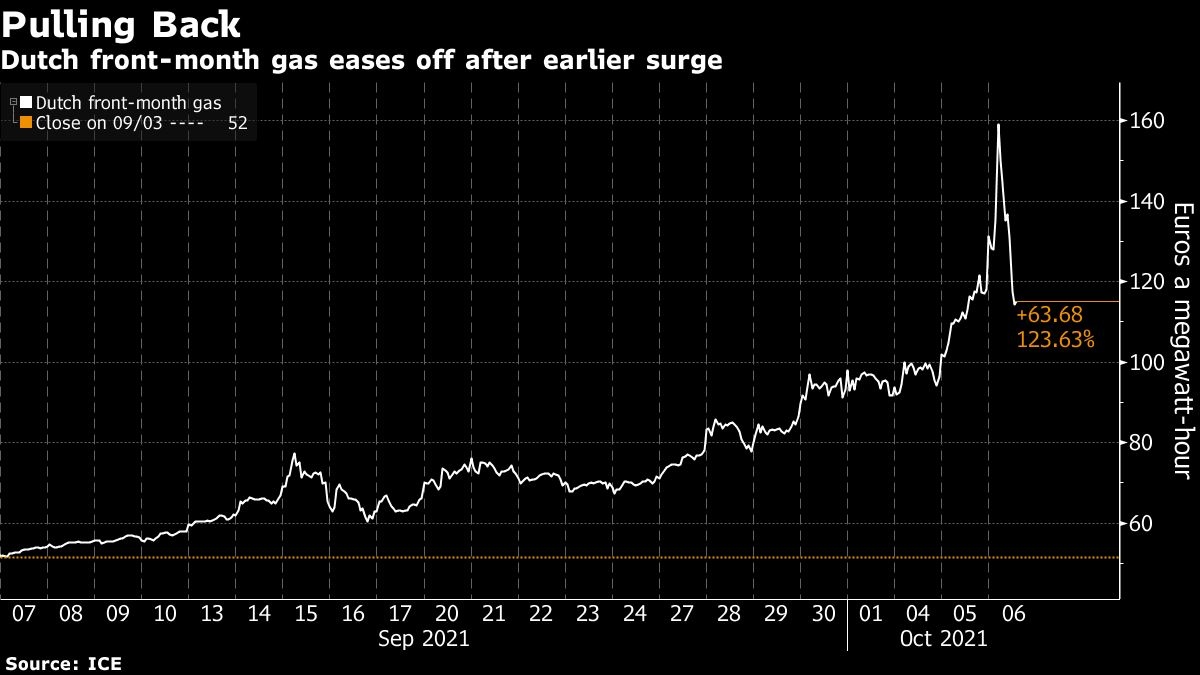 Europe’s energy crisis is rippling through stock and bond markets, spurring inflation fears and threatening to cripple major industries. The region’s governments are struggling to respond, with little more than hopes for a mild winter to cushion the blow.

Lower-than-anticipated supplies from Russia, the region’s largest supplier, have been a major cause of the dire situation, according to some European officials.

Putin emphasized that state-run Gazprom PJSC has fulfilled all of its supply contracts and his country has no desire to see the “speculative frenzy” that’s currently gripping markets.

“Russia has always been and is a reliable supplier of gas to its consumers all over the world –- both to Asia and to Europe, and always fulfills all its obligations in full,” he said.

Exports from Gazprom PJSC to Europe in the first nine months of the year were close to all-time highs, according to the company. If that pace is sustained for the rest of 2021, it would be a record year, Putin said.

Gazprom’s daily exports to Europe were close to record volumes earlier this year, but they fell in September amid increased domestic demand due to an early start of the heating season. The company also continues its storage-injection campaign at home, which is scheduled to end by Nov. 1.

Putin asked his government and energy executives for proposals on how to stabilize the energy market, and Nord Stream 2 wasn’t the only proposal. Novak, former energy minister and one of the architects of OPEC+, also suggested selling some additional volumes on Gazprom’s own electronic platform based in St. Petersburg.

Yet the fate of Nord Stream 2 is increasingly intertwined with the situation in Europe. September’s drop in Russia’s exports, which meant lower supplies through transit routes via Ukraine and Poland, sparked criticism that the country was withholding supplies to force faster approval of the pipeline.

Putin said Gazprom will send more gas via Ukraine than it’s contracted to this year. Yet he also talked down the suitability of the country as a transit route, saying Russia’s new pipeline systems under the Black and Baltic Seas -- which include Nord Stream 2 -- are economically and environmentally superior.

Shipping greater volumes of gas through Ukraine is “economically unprofitable for Gazprom, because it is more expensive,” Putin said. “Supply through new pipeline systems that were commissioned in recent years and are being commissioned now reduces the amount of CO2 emissions into the atmosphere by 5.6 times.”

Putin said the current market crisis is the result of a faster economic recovery around the world, which has “warmed up” demand for energy. An unexpectedly long and cold winter has depleted Europe’s gas storage, he said.

Yet he also highlighted a “mistake” made by European authorities to shift from long-term contracts typically favored by Russia to short-term sales on the region’s exchanges.

“Today it has become absolutely obvious that this policy is erroneous,” Putin said. “As a result, now the gas price has broken all historical records and today it’s already striving to US$2,000 dollars per 1,000 cubic meters.”