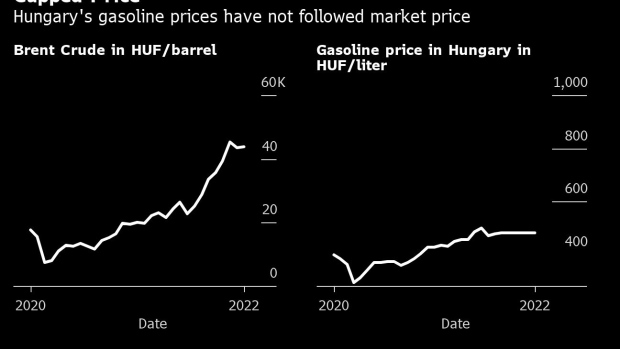 (Bloomberg) -- Hungary’s biggest refiner said it has paid Russia’s transit fee to Ukraine to resolve a dispute that has led to a halt in oil flows to central Europe.

Mol Nyrt., the oil company that sought to unblock supplies, said Ukraine and Russia have both accepted its decision to step in to settle the transfer fees.

“Mol has conducted negotiations with the Ukrainian and Russian parties on the resumption of transport through the Friendship pipeline,” it said in an e-mailed statement, referring to the English name of the Druzhba link from Russia. Mol said it “transferred the fee due for the use of the Ukrainian section” of the pipeline.

Ukrtransnafta JSC, which operates Ukraine’s oil network, blocked the the flow of Russian oil through Druzhba on Aug. 4, Russian pipeline operator Transneft PJSC said in a statement on Tuesday. The halt occurred after Transneft’s payment of transit fees for August was rejected by European banks that wouldn’t accept the cross-border transfer without approval from national regulators amid European sanctions.

Oil prices dipped as the link looked to resume flows.

The contract between Transneft and Ukrtransnafta requires 100% prepayment for transit flows. While the Russian pipeline operator paid the August transit fee on July 22, it received the money back on July 28, Transneft said.

The European banks involved in the transaction are not authorized to make their own decisions on cross-border payments from Russia due to sanctions and need approvals from their national regulators, according to Transneft.

“By assuming the fee, Mol could provide a swift solution to the issue,” the Budapest-based company said. “The Ukrainian party has pledged to resume the transport of crude oil within a matter of days, which had been halted a few days ago due to technical issues emerging on the banking front.”