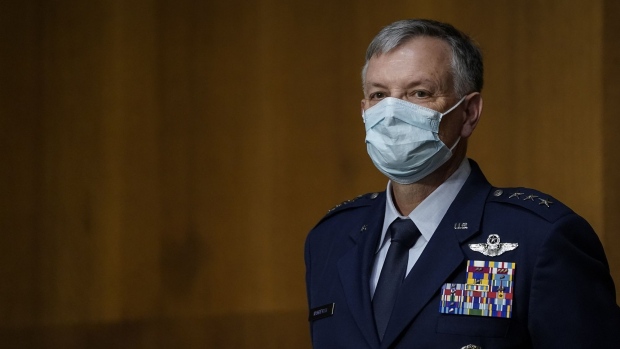 (Bloomberg) -- The four-star general who oversees the military command dedicated to defending the U.S. from attack says Russia remains the most “acute challenge to our homeland defense mission,” even as attention turns to China as the biggest emerging threat.

“Russian leaders seek to erode our influence, assert their regional dominance and reclaim their status as a global power through a whole-of-government strategy that includes information operations, deception, economic coercion and the threat of military force,” Air Force General Glen VanHerck, the head of Northern Command, said in written testimony Tuesday to the Senate Armed Services Committee.

The continuing military challenges posed by Russia took a back seat during President Donald Trump’s administration, and China continues to be described by Defense Secretary Lloyd Austin as the “pacing threat” that will determine the capabilities needed by the U.S.

But it’s Russia that “continues to conduct frequent military operations in the approaches to North America,” VanHerck said. The U.S. and Canada last year “responded to more Russian military flights off the coast of Alaska than we’ve seen in any year since the end of the Cold War” in the early 1990s, he said.

These Russian military operations include multiple flights of heavy bombers, antisubmarine aircraft and intelligence collection platforms near Alaska that show “both Russia’s military reach and how they rehearse potential strikes on our homeland,” VanHerck said.

In recent years, Russia has deployed “advanced cyber and counter-space weapons and a new generation of long-range and highly precise land-attack cruise missiles -- including hypersonics” that “complicate our ability to detect and defend against an inbound attack from the air, sea and even those originating from Russian soil,” he said.

Russia hopes to field a series of even more advanced weapons “intended to ensure its ability” to attack the U.S. including the “Poseidon transoceanic nuclear torpedo and the Burevestnik nuclear-powered cruise missile, which -- if perfected -- could enable strikes from virtually any vector due to its extreme range and endurance,” VanHerck said.

Worldwide, China continues “to pursue an aggressive geopolitical strategy that seeks to undermine U.S. influence around the globe and shape the international environment to its advantage,” VanHerck said. “China has made deliberate attempts to increase its economic and political influence with our close partners in Mexico and the Bahamas.”