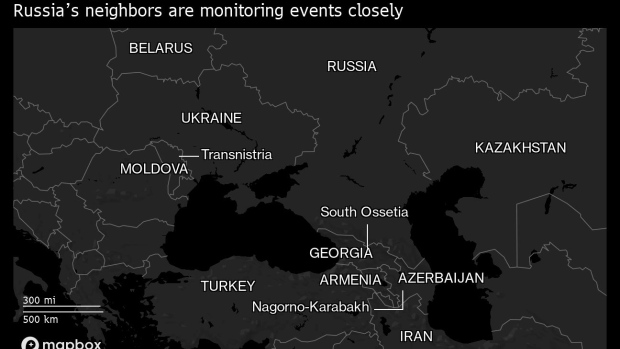 (Bloomberg) -- With President Vladimir Putin’s invasion of Ukraine stalling, other former Soviet states are weighing prospects for pulling away from Moscow’s orbit even as they fear risks of potential border conflict.

The war is sending tremors along an arc of instability stretching from Ukraine’s neighbor Moldova through the Caucasus and into Kazakhstan in central Asia. Putin’s intentions have become an urgent national security question in countries with so-called “frozen conflicts” or that have large pro-Russian minorities.

Russia may “open other fronts in case Putin needs to camouflage its failure in Ukraine inside a bigger crisis,” said Alexander Baunov, a Russian foreign policy expert at the Carnegie Moscow Center. “At the same time the Russian leadership understands that resources are not unlimited and already in Ukraine they are not sufficient.”

It’s a region sandwiched between rival powers jostling for dominance. Turkey is looking to boost its influence after helping its ally Azerbaijan defeat Armenia in a 2020 war, China is expanding its presence along trade routes to Europe, and Iran has an interest in bolstering its position in the Caspian Sea area. Ripples are being felt as far as the Balkans, with political divisions in Croatia over the war and Serbia facing European pressure to loosen Kremlin ties.

With Ukraine defending fiercely, it’s unclear if Russia can achieve its goals there and whether it has an appetite to expand a conflict that’s brought huge military losses and international isolation, for few gains. Still, the risk is that Putin escalates what Russian officials call a proxy confrontation with the West to try to dominate more of Moscow’s former Soviet empire.

He’s due to hold a Kremlin summit with fellow leaders of the Collective Security Treaty Organization of six ex-Soviet states, including Kazakhstan, Armenia and Belarus, on Monday. The Kremlin didn’t respond to a request to comment on whether Putin would seek the CSTO’s support for what Russia calls a “special military operation” in Ukraine.

Understanding the Roots of Russia’s War in Ukraine: QuickTake

Putin demonstrated his supremacy in Russia’s backyard as recently as January by dispatching troops to Kazakhstan to help President Kassym-Jomart Tokayev crush a violent uprising in the country that’s the size of western Europe.

Tokayev hasn’t backed Putin in return, citing “the critical need to ensure the security, sovereignty and territorial integrity of our state” where a fifth of the 19 million population is Russian, mostly living close to their shared border.

“Of course, Russia wanted us to be more on their side,” Tokayev’s deputy chief of staff, Timur Suleimenov said in a March 29 interview with Euractiv. “But Kazakhstan respects the territorial integrity of Ukraine.”

Azerbaijan has challenged Russian peacekeepers separating its military from Armenian forces under a truce that Putin brokered personally to halt their war over the disputed Nagorno-Karabakh region.

The Kremlin’s difficulties in Ukraine “may untie Azerbaijan’s hands,” said Elxan Shahinoglu, head of the Baku-based Atlas research center. “Russia may be opposed to the Azerbaijani army’s further advancement into Karabakh but it isn’t in a position to stop it.”

Azerbaijan signed a defense treaty with Turkey last year, and Armenia hosts Russia’s only permanent military base in the Caucasus. Prime Minister Nikol Pashinyan has begun talks since Armenia’s defeat to normalize relations with Turkey, its historical enemy.

Tokayev signed an “enhanced strategic partnership” agreement that included deepening defense ties with Turkish President Recep Tayyip Erdogan on May 10, during his first state visit to Turkey since becoming Kazakh leader in 2019. The sides also signed a deal to produce Turkish reconnaissance and strike drones in Kazakhstan.

The Kremlin’s claim to be “protecting” Russian speakers in Ukraine -- even as its army has devastated cities and been accused of war crimes -- rings alarms in Moldova.

Putin likely aims to seize territory in Ukraine’s east and south through to Transnistria as part of a prolonged war, US Director of National Intelligence Avril Haines said May 10. The Kremlin-installed occupation government in Ukraine’s southern Kherson region said it would ask to join Russia, the Tass news service reported May 11.

Why Mariupol and the Donbas Region Matter to Putin: QuickTake

Russian troops have occupied two regions of Georgia since a 2008 war, including South Ossetia whose outgoing president said Friday it will hold a referendum July 17 on joining Russia. The Kremlin hasn't indicated if it backs a vote. The region's newly-elected president didn't commit to the date, saying it wasn't agreed with him, though he said he supports becoming part of Russia, according to Tass.

Georgian authorities have reacted cautiously to the breakaway region's referendum push and have been careful not to antagonize Moscow over the war in Ukraine, while pursuing the same goals as Kyiv of European Union and North Atlantic Treaty Organization membership.

Russia has an incentive to bind fellow members of the Moscow-led Eurasian Economic Union such as Kazakhstan and Armenia more closely as it seeks avenues for grey imports to weaken unprecedented international sanctions.

Equally, countries from central Asia to Turkey are working to boost trade along a Trans-Caspian route that bypasses Russia via Kazakhstan, Azerbaijan and Georgia. Pipelines carry energy from the Caucasus to Europe skirting Russia.

Doubts in Kazakhstan about further integration in the Eurasian Economic Union are being fueled by the sanctions against Russia. The then Ukrainian President Viktor Yanukovych’s decision to snub an EU accord and seek closer ties with the ex-Soviet bloc first triggered the Ukraine crisis, leading to his overthrow in a 2014 pro-western revolution followed by Putin annexing Crimea.

“Any attempt to exit the Eurasian Union will be seen by Russia as hostile,” said Dosym Satpayev, director of the Almaty-based Risk Assessment Group.

Russia’s ally Belarus is the cautionary tale for other ex-Soviet neighbors.

Why Belarus Is in Lockstep With Russia Over Ukraine: QuickTake

Longtime ruler Alexander Lukashenko allowed Putin to use Belarus as a launchpad for invading Ukraine, though he hasn’t sent troops himself, and is increasingly reliant on the Kremlin since crushing protests over disputed 2020 elections.

“While Russian troops are in Belarus and Lukashenko is in his seat, Belarus is not free,” exiled opposition leader Sviatlana Tskihanouskaya said.

Belarus “may retain some attributes of independence but essentially it is controlled by the Kremlin,” said Joerg Forbrig, the German Marshall Fund’s Director for Central and Eastern Europe.