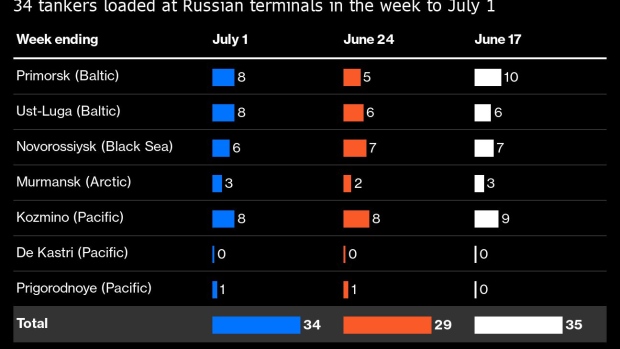 A tanker moored in a gas and oil dock at the Port of Constanta in Constanta, Romania, on Tuesday, March 22, 2022. Ukrainian ports have been shut since Russia's invasion leading demand to shift further west along the Black Sea to Romania and Bulgaria, some of the European Union's top grain exporters. , Bloomberg

(Bloomberg) -- Russia’s seaborne crude exports in the seven days to July 1 rebounded from the previous week’s plunge, but shipments to Asia are slipping, even as flows are diverted to the country’s Black Sea terminal to cut the voyage distance to India.

Aggregate crude flows from Russian ports were up week-on-week by 23%, recovering most of the volume lost over the previous seven days during a brief halt in shipments from the Baltic port of Primorsk. Still, cargoes bound for Asia — a crucial market where China and India have stepped in to prop up Russian exports others have shunned in response to its invasion of Ukraine — were down by more than 15% on both a weekly and four-week average basis from the highs seen at the end of May.

Overall, Russia’s seaborne shipments returned to 3.67 million barrels a day, broadly in line with the plateau level achieved since the start of April.

Leaders of the G7 group of the world’s largest advanced economies agreed to examine the idea of  imposing a price cap on Russia’s oil exports to reduce the flow of funds to the Kremlin after its troops invaded Ukraine four months ago, while allowing the oil to keep flowing. Questions remain on how such a cap could be imposed and how President Vladimir Putin might react.

But even as the G7 countries try to put flesh on the bones of their price capping plan, weekly data on Russia’s seaborne crude exports show that, despite last week’s recovery, flows are edging lower on a four-week rolling average basis.

Asian countries, dominated by China and India, are still taking more than half of all the crude shipped from the Russia, but that share is also slipping. In the most recent four-week period, flows to Asia accounted for 52% of Russia’s total seaborne exports. That figure includes volumes on tankers heading from Baltic and Black Sea ports to the Suez Canal and is down from a high of 63% in the four weeks to April 15.

Shipments to China averaged 887,000 barrels a day in the most recent four-week period, with flows to India at 641,000 barrels a day. But both those figures are expected to rise, once destinations become known for about 180,000 barrels a day of crude on tankers yet to signal final discharge locations. Shipments to Asian countries other than China and India have virtually dried up, with rare cargoes heading to Japan and South Korea from Pacific terminals.

Russia has already lost almost two-thirds of its market for seaborne crude in northern Europe, with an EU ban on imports of Russian oil still five months away. The volume it’s shipping there has stabilized in a range between 400,000 and 450,000 barrels a day since the end of April. Most of that is going into storage tanks at Rotterdam in the Netherlands.

Shipments of Russian crude to the Mediterranean soared after the invasion of Ukraine and remain at about 750,000 barrels a day on a four-week average basis.

Lukoil’s ISAB plant on the Italian island of Sicily is a key buyer of Russian crude, while Turkey has also boosted purchases. It remains to be seen what ISAB will do when the EU ban on seaborne Russian crude comes into force in December. Until then, with no legal impediment to its purchases and few, if any alternatives to its diet of Russian crude, shipments are unlikely to fall much.

The Mediterranean picture is repeated in the Black Sea, again driven by increased shipments to a Lukoil-owned refinery in Bulgaria. While flows to Romania are little changed since the start of the year, those to Bulgaria are two-and-a-half times as big as they were in January and early February.

Combined shipments to Bulgaria and Romania have averaged close to 300,000 barrels a day since mid-April, although they have retreated from the peak seen in the weeks to June 17. Four-week average shipments to July 1 were the lowest in five weeks.

Moscow’s revenue from export duty rebounded even more strongly than crude flows in the week to July 1, rising by $34 million, or 27%, to $162 million. Higher per-barrel duty rates payable in July were responsible for the bigger jump.

Crude shipments in July will earn the Kremlin $55.20 a ton (about $7.53 a barrel), up from $44.80 a ton ($6.11 a barrel) in June. That is the highest duty rate charged by the Russian government since April, reflecting an increase in Urals prices between mid-May and mid-June compared with the month earlier.

A total of 34 tankers loaded 25.7 million barrels from the country’s export terminals in the week to July 1, vessel-tracking data and port agent reports show.

Flows of Urals crude from terminals in the Baltic, Russia’s primary outlet, rebounded in the week to July 1, with the number of shipments from the Arctic terminal at Murmansk also up. Flows from Russia’s Pacific ports were stable, while one fewer ship departed from the Black Sea port of Novorossiysk.

The volume on tankers loading at Baltic terminals and showing destinations in northern Europe soared to equal the highest level since the week ending March 11, while shipments to the Mediterranean fell to the lowest since mid-February.

Flows from the Baltic to Asia remained at just over 520,000 barrels a day, but the large volume of ships yet to show a final destination suggests this figure will rise.

Six tankers completed loading at Novorossiysk in the Black Sea in the week to July 1, down by one from the previous week. But larger cargo sizes led to an increase in the volume of crude loaded at the port. Shipments to Asia soared, as Russia hikes flows from the Black Sea port to take advantage of the shorter sailing distance to Asian markets.

Eight tankers loaded ESPO crude at Kozmino, unchanged from the previous week. A third cargo is heading for India, where it is due to arrive at Paradip on the east coast on July 15.

There were no shipments for a eighth week from De Kastri, which handles Sokol crude from the Sakhalin 1 project. Two shuttle tankers remain anchored empty off the terminal.

One cargo of Sakhalin Blend crude was loaded in the week to July 1 and is headed for Zhoushan in China.

Seven tankers left Russia’s export terminals signaling destinations in India in the week to July 1. One loaded at a western terminal and is heading to China, while another two departed showing destinations that suggest they’re heading for the Suez Canal and on to Asia.

Three more vessels loaded at Ust-Luga and are yet to show destinations that give a clear indication of where they are likely to discharge, with one signaling Valetta in Malta, one Gibraltar and the other simply “for orders”.

Several tankers that loaded in earlier weeks are still not showing final destinations, with most continuing to indicate Port Said. The Suezmax taker Bouboulina made a U-turn off the northwest corner of Spain where it spent almost two days moving very slowly. It may have carried out a ship-to-ship transfer to another vessel that wasn’t giving an automatic position signal. Bouboulina is now anchored off Rotterdam, reporting a draft that suggests it still has most, if not all, of its cargo on board. But as a ship’s draft is manually entered into its automatic information system, it is not always reliable.

The three Aframax tankers — Skadi, Merope and Amber 6  —  that vanished from  vessel-tracking data in the mid-Atlantic between June 15 and June 20 all reappeared and are headed back toward Europe. All three are also still reporting drafts that suggest their cargoes remain on board, but those figures need to be treated with caution.

A fourth tanker, Zhen I, carried out a ship-to-ship transfer of its cargo to a hidden vessel west of the Azores in the final week of June. It, too, is returning to European waters.