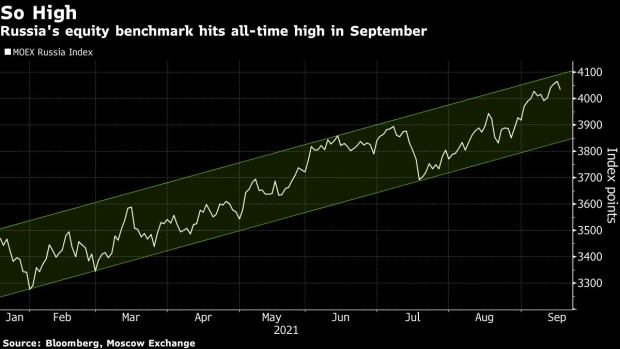 A giant mural depicting Vladimir Putin, Russia's president, on the side of an apartment block in Kashira, Russia, on Thursday, June 9, 2021. Inflation jumped to the highest level since 2016 in May, fueling expectations that the Bank of Russia will move more aggressively to raise interest rates Friday. Photographer: Andrey Rudakov/Bloomberg , Bloomberg

(Bloomberg) -- The appeal of Russian markets is eclipsing risks from President Vladimir Putin’s crackdown on political rivals as the nation goes to the polls in parliamentary elections.

The stock market is at a record, the ruble is on a tear, foreign ownership of local bonds has surged to a five-month high and measures of credit risk have eased back to pre-pandemic levels. Money is flowing into markets even as many opposition leaders have been forced to choose between jail and exile.

After being battered by political risks for almost a decade, Russian markets are enjoying a period of resilience thanks to the central bank’s drive to curb inflation, a conservative fiscal policy, rebounding commodity prices and the easing threat of U.S. sanctions. With so many reasons to be bullish, investors are looking past the political situation, even risking a blind spot in their environmental, social and governance considerations.

“Markets like the technocratic orientation of the Russian government,” Timothy Ash, an emerging-market strategist from BlueBay Asset Management, said. “It encourages them to look the other way when it comes to ESG.”

The Kremlin took no chances before the elections to ensure that Putin’s United Russia party maintains a veto-proof majority in parliament, even blocking popular politicians from the so-called systemic opposition from the ballot. Tensions rose with the near fatal poisoning of opposition leader Alexey Navalny last year and his arrest in January when he returned to Russia after receiving treatment abroad.

But the developments have had little material impact on Russia’s markets. Given investors’ desire for certainty, Russia has shown itself to be a predictable environment with little risk of a sudden regime change or policy U-turns as often is the case with emerging markets.

A main factor behind this reputation is the central-bank governor, Elvira Nabiullina. The hawkish policy maker has raised rates at five meetings in a row in the face of stubbornly high inflation.

Traders have liked her assurance that more hikes may be coming. The ruble is the best performer this year among emerging-market peers. Foreign ownership of bonds has risen above 20% for the first time since April. Investors now demand a mere 148 basis points over Treasury yields to own Russia’s dollar bonds, near the lowest premium since March 2020.

The benchmark MOEX Index of stocks has rallied 23% this year, with the dollar-denominated RTS gauge jumping 26%. That’s a strong performance compared with emerging-market stocks, which are little changed in 2021. Despite the gains, Russian equities still cost half as much to own as peers in the developing world, based on price-earnings ratios.

Local companies have joined in the global initial public offering boom, with the busiest first half since 2013 and an expanding pipeline of new issues.

Investors are also betting that relations with the U.S. have stopped deteriorating, amid a perception that President Joe Biden’s administration does not want to confront Putin as it deals with more pressing issues from China to Afghanistan.

The country’s fundamentals are rebounding from the pandemic effects. The economy is projected to grow 3.9% this year, with a current-account surplus of 3.9% and a narrower budget deficit of 0.8%. Foreign-exchange reserves are a record-high $621 billion.

“I don’t think anyone is under any illusions about the political situation in Russia,” Paul McNamara, a money manager at GAM Investments, said. “But in an uncertain world, Russia runs a tight fiscal ship, with a strong balance sheet and the price of its exports going through the roof.”