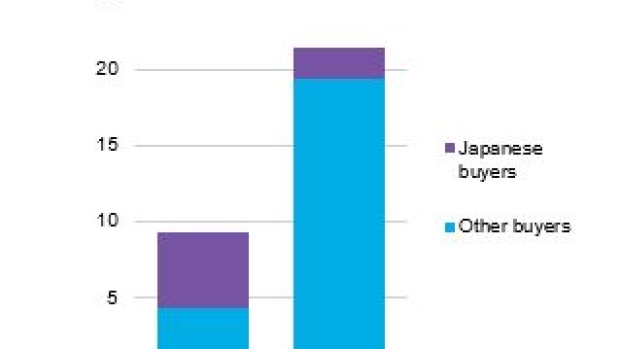 (Bloomberg) -- Russia’s move to reshuffle ownership of the Sakhalin-2 natural gas project may constrict global markets even more by pushing Japan to compete with Europe for alternative sources of supply.

President Vladimir Putin’s decree to transfer rights for the plant to a new Russian company has no immediate impact on the project’s biggest customer, Japanese Prime Minister Fumio Kishida said. A Kremlin spokesman, Dmitry Peskov, also said there is no threat to LNG supplies from the plant at the moment. Japanese trading houses Mitsubishi Corp. and Mitsui & Co. own a combined 22.5% of the project.

Even so, the world’s second-biggest LNG buyer is considering replacing Russian flows by buying more from the spot market or from other countries, Trade Minister Koichi Hagiuda said. Japan already asked government officials in the US and Australia for more supply in order to reduce dependence on Russia, he said.

That replicates efforts by the European Union to wean itself off Russian supplies as punishment for invading Ukraine, including by agreeing to buy extra from the US this year. Russia severely curtailed pipeline imports into Europe last month as Putin steps up his use of gas as a weapon, causing fresh price shocks ahead of peak winter demand.

“If the Sakhalin project, which has supplied Japan at competitive prices, is in such a state of limbo, spot prices are at risk of rising further, which could even trigger a panic in the market,” said Hiroshi Hashimoto, an analyst at the Institute of Energy Economics in Japan.

European gas prices more than doubled since the start of the year, while Asian prices increased by about a third.

Uncontracted LNG already is limited. In addition, Asian buyers have been losing to Europe on prices, meaning flexible LNG from the US has been favoring destinations from the UK to Spain instead of Japan or China. Japanese utilities already rushed to buy more super-chilled fuel during a record heat wave in late June, contributing to higher Asian LNG prices.

The global LNG market is expected to remain tight until 2026, according to BloombergNEF. Additional supply from new plants in Qatar and the US will take several years to arrive, potentially triggering continuous competition and shortages in those nations unable to pay higher prices.

What LNG Can and Can’t Do to Replace Russian Gas: QuickTake

It’s the second time the Kremlin directly interfered in the Sakhalin-2 project, threatening foreign investment. In 2006, pipeline gas supplier Gazprom PJSC, which had no experience in LNG, took control of the development from Shell Plc after regulators threatened to close the $22 billion project on environmental grounds. The 100% foreign-owned project, approved as a production-sharing agreement in 1994, had become an anomaly as Putin tightened control over the domestic energy industry.

Shell, which holds a 27.5% stake in the facility in Russia’s far east, announced it would exit the project after Russia invaded Ukraine. It also wouldn’t commit to any new investments in the country.

Japan will determine whether it can stay after assessing offered conditions, Hashimoto said. And it would be increasingly difficult to do business in Russia in years to come, including involvement in future liquefaction projects such as Novatek PJSC’s Arctic LNG 2.

“This adds a new layer of complexity to existing sales-and-purchase agreements, all of which might need to be transferred to the new company,” said Kaushal Ramesh, an analyst at Norwegian consultant Rystad Energy. “In the near term, chances are they will continue to supply to long-term contracts.”