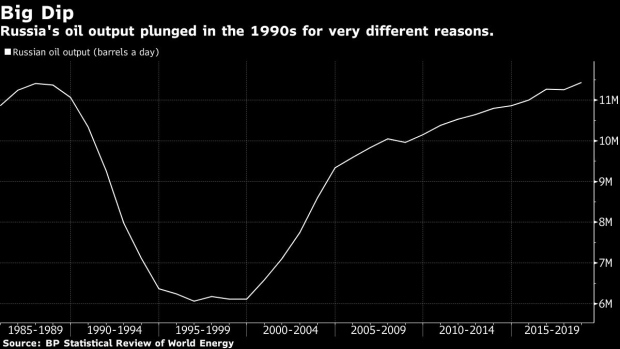 (Bloomberg) -- Russian oil producers are confronting their greatest challenge in decades as they try to fend off a historic price slump without permanently damaging their fields.

To save the market from collapse caused by the coronavirus, Moscow and its OPEC allies agreed to cut crude output deeper than ever before. Their deal pulled prices back from the brink, but the speed and duration of the shutdown increases the risk of losing some oil wells forever.

Both the recovery of the global crude market and Russia’s place within it will rest on decisions being made today by engineers and geologists from the Volga region to West Siberia.

“Mass sealing of oil wells is a much more serious thing than short-term idling” in Russia’s frigid conditions, said Evgeny Kolesnik, a manager with more than 25 years of experience in the country’s industry. “It’s by far not a given that after a well has remained shut-in for so long it will pump at the same levels as before.”

Since the start of their cooperation with the Organization of Petroleum Exporting Countries more than three years ago, Russia and its oil companies have got used to making gradual production cuts, which were often implemented in full for only a few months before output rose again.

This flexibility allowed the nation to maintain its production capacity despite having many decades-old wells in remote and frigid locations, a very different environment to its OPEC+ allies. Russia even set a new post-Soviet output record last year while still subject to quota restrictions.

This time around, Russian companies have been asked to cut about ten times deeper and much faster than before. They will need to shut a large number of their wells for as long as two years, with the risk of losing some of those forever.

The longer a reservoir remains out of operation, the higher the chance that changes in pressure, water content and residue clogging will affect future output, said Vitaly Yermakov, a senior research fellow at the Oxford Institute for Energy Studies.

Russia’s oil industry has experienced bigger drops in production. In 1996, the nation’s output fell to just over 6 million barrels a day from more than 11 million a decade earlier, according to data compiled by BP Plc.

But that 10-year slide was driven by lack of investment after the collapse of the Soviet Union. The last time Russia had to deliberately close down a large swathe of its wells was more than 75 years ago, when German forces advanced on the Caucasus region during the Second World War, Kolesnik said.

“If you leave a single ton of crude to the Nazis, we’ll execute you,” Soviet leader Joseph Stalin told deputy oil-industry minister Nikolay Baybakov in 1942, according to a historical account on Gazprom PJSC’s website. “And if you destroy the fields, leaving us without output and Hitler doesn’t approach them, we’ll execute you as well.”

In the end, many wells were beyond repair after the shutdown and new ones had to be drilled, Baybakov said in an interview with Novaya Gazeta in 2002. It was not until 1949 that production returned to pre-war levels, according to an electronic library of documents from the Soviet Union’s Statistical Bureau.

Today’s shut-downs aren’t such a matter of life and death, but the stakes are high. Russia is making about a quarter of the total OPEC+ cut, so failure to implement it quickly enough could undermine the $10-a-barrel recovery in crude prices. Yet companies must also ensure production can recover when the worst of the pandemic is over

“Normally, around 10% to 15% of the wells at a Russian oil field are idled monthly for maintenance,” said Kolesnik, who over the course of his career has worked at projects run by Lukoil PJSC, Gazprom Neft PJSC and Surgutneftegas PJSC.

Russia’s previous cuts under the OPEC+ deal amounted to about 3% of total output. Now the country must reduce its crude output by 2.5 million barrels day in May and June, down from about 11 millions barrels a day.

That means output needs to stop at a larger number of wells, depending on the geology of each individual project, said Kolesnik, who is now an executive director at Moscow-based oil-service company Nefteotdacha. “At some fields, maybe as much as 50%, somewhere maybe 70%, and some projects may be halted altogether.’

Had OPEC+ agreed on cuts lasting just several months, the bulk of the country’s production could still be restored within a week with little risk to future output, Kolesnik said. But Russia has pledged to restrain its output for two years. Its reduction will average 2 million barrels a day between July and December, then flatten further to 1.5 million through April 2022.

Longer shut-ins require meticulous sealing of the wells, lifting of the underground pumping equipment, and filling the reservoir with anti-freeze solutions if they are surrounded by permafrost, Kolesnik said.

“Some well-stimulation steps may then be necessary,” to return a reservoir to production, said Sergey Klubkov, head of oil and gas exploration and production at Vygon Consulting. “These steps are not always successful, so the well may be lost.”

There’s a wide divergence of views on how much of Russia’s capacity is at risk.

Such an assessment is “too dramatic,” said Oxford Energy’s Yermakov. Inside the “risk zone” are wells that produce crude with a high water content of about 95%, he said. “They account for 5% to 7% of Russia’s total production.”

In addition, the new generation of horizontal wells may be at risk, Yermakov said. During the shut-in, the cracks in the rock that allow the oil and gas to flow out may heal because of the pressure, he said.

The nation’s main oil producers, including Rosneft PJSC, Lukoil and Surgutneftegas, as well as Russia’s Energy Ministry, did not respond to requests for comments on how the OPEC+ cuts could affect the country’s fields.

One way to avoid that situation would be to keep drilling new wells without bringing them into production. Kolesnik said. Energy Minister Alexander Novak last month called for President Vladimir Putin to support financing of new drilling. Rosneft asked the Russian leader to delay tax payments related to exploration.

“If we leave our drillers without work now, in two years when we need to restart production massively, it will be very difficult to restore the expertise,” Kolesnik said.