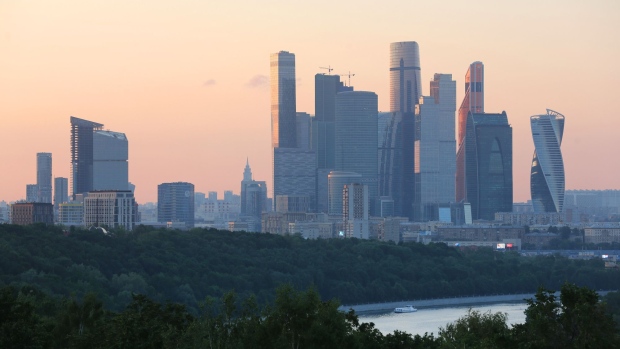 The skyscrapers of the Moscow International Business Center, also known as 'Moscow City,' stand on the city skyline in Moscow, Russia, on Saturday, June 9, 2018. FIFA expects more than three billion viewers for the World Cup that begins this week in Russia. Photographer: Andrey Rudakov/Bloomberg , Bloomberg

Renaissance Insurance Group JSC, Russia’s largest online policy provider, published an intention to float shares in Moscow on Monday, seeking to raise as much as 21 billion rubles ($289 million) to expand its business.

Owners of the Russian insurance group also plan to offer some shares, the company said in a statement, without elaborating on the size of that stake.

Russia had the busiest first half for stock offerings this year since before the 2014 annexation of Crimea, with consumer companies dominating the pipeline. Renaissance companies had a 5.1% share of Russian insurance premiums in the first half of 2021, putting it in the top ten of local insurers, according to Expert RA ratings agency.

The company may seek a valuation of around $1 billion, a person familiar with the plans said last week. Shareholders may offer a stake of about $150 million, several people said at the time.

Renaissance Insurance plans to use the proceeds “to accelerate the group’s development by financing organic growth, investments in further digital initiatives, potential value-accretive acquisitions and the possible repurchase of shares,” according to the statement.

Jordan’s Sputnik Group and partners own a 59% stake, and a group of investors linked to Abramovich, including Abramov and Frolov, bought almost 30% in the company in May.