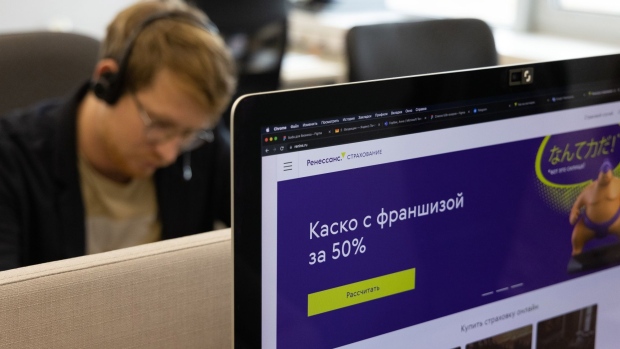 A computer displays the company website inside a Renaissance Insurance office in Moscow, Russia, on Wednesday, Sept. 15, 2021. A Russian insurance company backed by billionaire Roman Abramovich has picked banks to prepare it for an initial public offering, according to two people familiar with the matter. Photographer: Andrey Rudakov/Bloomberg , Bloomberg

The company sold as much as 162 million new shares, at 120 rubles each in Moscow, it said in a statement. The sale values the insurance group, controlled by investors led by Boris Jordan, at 66.8 billion rubles. The stake was smaller than initially planned, when the company said it could raise up to 25.2 billion rubles.

Renaissance Insurance is the first to sell shares among several Russian companies seeking to go public this autumn, following Russia’s busiest first half for stock offerings this year since before the annexation of Crimea. IT firm Softline this week set a price range for its IPO, while carsharing service Delimobil and real-estate platform Cian have also filed to sell shares.

As part of an over-allotment option, selling shareholders include a group of investors led by Jordan, Baring Vostok, Evraz Plc billionaires Alexander Abramov and Alexander Frolov, and Andrey Gorodilov, who worked at Roman Abramovich’s oil producer Sibneft and was later deputy governor of Chukotka.