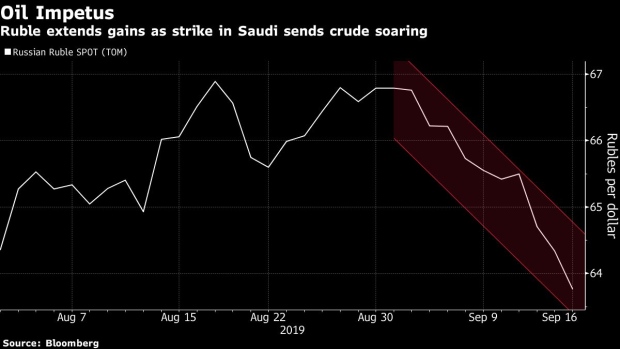 Attendees walk past depictions of the Arctic on the Rosneft Oil Co. pavilion ahead of the St. Petersburg International Economic Forum (SPIEF) in St. Petersburg, Russia, on Wednesday, June 5, 2019. Over the last 21 years, the Forum has become a leading global platform for members of the business community to meet and discuss the key economic issues facing Russia, emerging markets, and the world as a whole. Photographer: Andrey Rudakov/Bloomberg , Bloomberg

(Bloomberg) -- Russia’s ruble rallied, bucking declines in emerging markets, and shares of the nation’s largest oil company surged, after a strike on a Saudi Arabian refinery boosted the outlook for other producers.

The ruble climbed 0.9% to 63.7425 per dollar, headed for its strongest level since July. Shares of Rosneft PJSC surged 3.6% to 424.80 rubles, the most since February, as Citigroup said the company’s production flexibility means it’s “best-positioned” to benefit from the Saudi outage.

The ruble joined a rally in currencies of other commodity-linked nations, including the Norwegian krone and the Canadian dollar, as the attack on the world’s largest crude exporter sent Brent crude soaring 11%.

Russia’s currency will get a lift because every extra $1 on the oil price translates into an additional $7.5 million of export revenue each day, with about 75% of that going into the budget, according to Chris Weafer, a senior partner at Macro Advisory Ltd. in Moscow.

“Our short-term tactical model highlights that there is more upside, if oil holds at current levels,” VTB Capital strategists including Maxim Korovin, wrote. “Middle East geopolitical premium is back on the table.”

To contact the reporter on this story: Alex Nicholson in Moscow at anicholson6@bloomberg.net

To contact the editors responsible for this story: Alex Nicholson at anicholson6@bloomberg.net, Natasha Doff