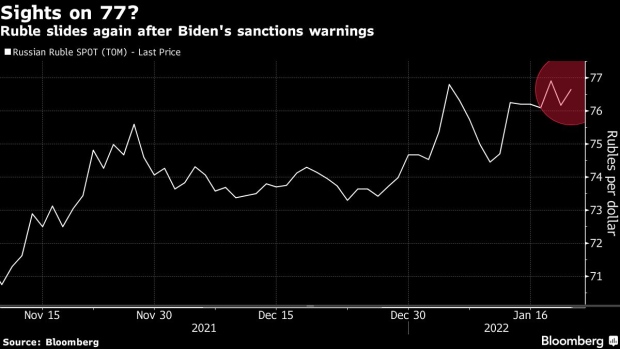 The Russian currency and bonds retreated, trimming a rebound earlier in the week after U.S. President Joe Biden said he thinks Moscow will “move in” on Ukraine, fueling concern tougher sanctions could be on the way.

The ruble bucked broader gains among emerging-market currencies, while stocks fluctuated. Bonds, which had been supported by the Finance Ministry’s decision to pause auctions, slumped, lifting the yield on 10-year debt 18 basis points.

Biden Expects Russia to ‘Move In’ on Ukraine; Warns of Sanctions

“The ruble will remain under pressure,” said Per Hammarlund, the chief emerging-markets strategist at SEB AB in Stockholm. He sees the Russian currency weakening around 0.5% to 77.3 versus the dollar “in the coming days” and dropping further to 78.4 as soon as next week.

While Biden warned that a Western sanctions response would be a “disaster” for Russia, he acknowledged that the U.S. and its allies are split on how to respond should Russia pursue a “minor incursion” against Ukraine that falls short of an invasion.

“I don’t think anyone knows what will happen, even in Russia,” said Richard Segal, a research analyst at London-based Ambrosia Capital. “Russian assets are already discounting the worst. It’s at the bottom of the EMFX table for the past month. That said, the EM outlook is quite poor at present so I don’t see the possibility of a rally near term barring a major peace initiative.”

Stock markets reflected the confusion. The benchmark MOEX index swung between gains and losses, dropping as much as 1% before advancing 0.6% as of 1:23 p.m. in Moscow.

“Russian assets cannot perform well for now,” said Cristian Maggio, the head of portfolio strategy at TD Securities. “Even if you still have a say 60%-70% chance of de-escalation -- which would be conducive to a RUB rally and lower yields -- you have a 30%-40% chance of a very high impact scenario whereby it may be impossible to trade Russian assets, or forced liquidation is imposed.”