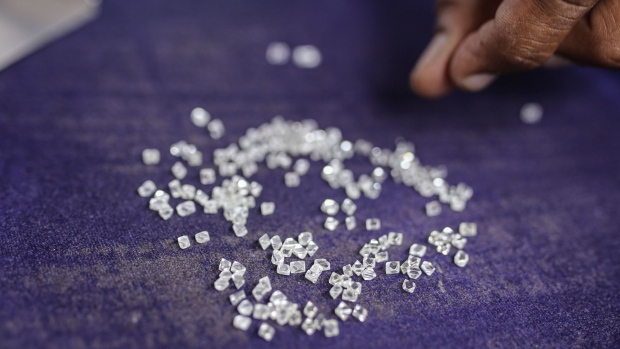 The secretive sale of Russian diamonds, worth hundreds of millions of dollars every month, is fracturing the global trade that stretches from cutting factories in Mumbai to luxury stores on New York’s Fifth Avenue.

Many in the industry refuse to deal in Russian gems following the invasion of Ukraine and after mining giant Alrosa PJSC was hit with US sanctions. But there’s a handful of Indian and Belgian buyers who are snapping up large volumes at lucrative terms, getting to pick and choose the diamonds they need while others stay away.

The deals are happening quietly, even for the famously secretive diamond world.

And while they’re not breaching sanctions, there are other risks to consider — heavyweights like Tiffany & Co. and Signet Jewelers Ltd. don’t want Russian diamonds that were mined since the war began, and suppliers say they are worried about losing crucial contracts by dealing in Alrosa gems.

The sales present a problem for any attempts at a boycott: once stones enter the supply chain they can become near-impossible to track. Diamonds are sold in parcels of similar sizes and qualities — there are about 15,000 different categories — and can be retraded and remixed multiple times before ending up in an engagement ring or pendant.

Western retailers trying to avoid Russian gems are also concerned about securing enough diamonds, especially the small and cheaper types that Alrosa specializes in. The company accounts for about a third of rough diamond supply, and any Russian stones mined before the war are essentially all used up.

Some big European luxury brands have asked Alrosa’s rival, De Beers, to increase sales to suppliers they trust, according to people familiar with the matter who asked not to be identified discussing private information. The company has made some efforts to do so, but has little extra to sell, the people said.

As Russian supplies divide the diamond world, much of the tension is focused in the “midstream,” a vast network of mostly family-owned businesses that cut, polish and trade the world’s precious stones — many of them in India — and provide the link-up between mining companies and jewelry stores.

Before Russia’s invasion of Ukraine, Alrosa sold to more than 50 such customers every month. Sales froze up initially after the invasion but have now returned to near-normal levels.

But it’s happening very quietly. Before the war, the company ran 10 sales a year out of its Antwerp, Belgium, sales office based on a set calendar, and published the results afterwards. Alrosa has now stopped publishing any information on its sales or financial performance.

Most of the Indian midstream is still avoiding Russian purchases because of the risk that they lose western customers as a result, according to people familiar with the matter.

The US in particular is a crucial market — 50% of all polished diamonds are sold in the country, ranging from luxury pieces worth tens of millions to stones that sell for less than $200 at retailers like Walmart Inc.

While diamonds are a discretionary luxury for the people who buy them, the business itself is an economic bedrock for the major cutting and trading hubs. The diamond trade roughly supports an estimated one million jobs in India, where the government has pushed to keep business flowing. Belgium’s Prime Minister has also reiterated the country’s position that Russian stones should not be sanctioned — more than 80% of rough diamonds are traded through its port city of Antwerp at some stage.

For now, the vast majority of Russian stones are going through about 10 buyers. Indian companies Kiran Gems and Shree Ramkrishna Exports Pvt are the two largest buyers, according to people familiar with the matter.

Kiran and SRK did not respond to emails and calls seeking comment. Spokespeople for Alrosa and De Beers declined to comment.

After the Russian diamonds are cut and polished, the assumption is that they will end up in jewelry for markets like China, Japan and India. Those three countries together account for about 30% of global demand and — unlike western retailers — are happy to receive Russian production.

However, the opaque nature of the diamond trade with its long and convoluted supply chain means that Russian stones are likely to end up in western markets as well.

A diamond’s origin is clear at the start of the chain when it is issued a certificate under the Kimberley Process, which was designed to end the sale of “blood diamonds” that financed wars in the 1990s.

But after that, things can get murky. Parcels of gems are often intermingled at trading houses, and the original certificate will be replaced with “mixed origin” documentation, making it near-impossible to keep track of where Russian diamonds are eventually sold.

While the fear of alienating western companies is the biggest obstacle for most in the industry, the practical difficulties in buying from Russia are also a deterrent.

Following the US sanctions, most European and Middle Eastern banks have withdrawn from funding purchases from Alrosa, which previously sold almost all its diamonds in US dollars. That leaves a few Indian banks that have become more comfortable in recent months with how to facilitate transactions in other currencies, primarily euros and rupees.

In one sign of ongoing wariness, IndusInd Bank Ltd., one of the biggest financiers of India’s diamond buyers, has been requiring customers in those deals to sign waivers acknowledging they’re responsible if any transactions are frozen, according to people familiar with the situation.

A spokesperson for IndusInd said the bank “is compliant with domestic as well as international trade sanctions inter alia not undertaking transactions with sanctioned entities/individuals.”

For those who are still willing to buy, Alrosa is offering perks including unusual flexibility, although it’s kept pricing overall on par with De Beers.

Normally, customers are expected to take a pre-agreed assortment of diamond parcels. Now, the company is allowing buyers to handpick their packets, which means they can select diamonds that are in short supply or the ones that are likely to yield the best profit. In a reflection of the shifting structure of the industry, it’s also looking at establishing more permanent sales offices in India.