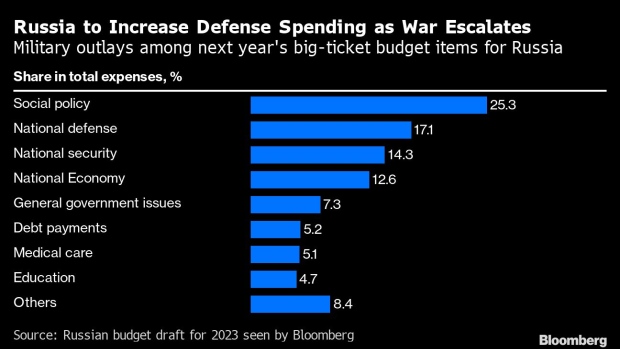 (Bloomberg) -- Russia will hide the purpose of almost a quarter of its planned spending next year, as it redraws the budget for a longer war in Ukraine and prepares to annex parts of its neighbor’s territory.

A draft budget for 2023 allocates approximately 6.5 trillion rubles ($112 billion) in classified or unspecified outlays, according to Bloomberg calculations based on the document. In total, expenditure is planned at 29 trillion rubles.

The level of secrecy is unprecedented and reflects Russia’s increasing reluctance to open up its books to scrutiny since President Vladimir Putin’s invasion of Ukraine in February. The government has already stopped publishing some key statistics including a detailed breakdown of trade.

The Audit Chamber, a state budget watchdog, has estimated that spending on classified needs in the first half of the year accounted for slightly less than 19%. The budget’s secret share previously peaked at over 21% in 2015 and was at an all-time low of 14.9% last year, according to the Russian business daily Vedomosti.

“We have closed off a lot of things right now,” Finance Minister Anton Siluanov told reporters during an online briefing on Wednesday. He said Russia won’t disclose the cost of what the Kremlin calls its “special operation” in Ukraine.

For all the expenditures that aren’t itemized, the shift in priorities is clear in the new budget plan, which tacks on much more spending for the military. If adopted, outlays on defense next year will be more than 43% higher than first assumed.

The fiscal draft needs the approval of both houses of parliament and then be signed by the president to become law. All secret expenses will be discussed during a closed committee hearing, according to Siluanov.

The budget will likely need to accommodate the cost of annexing the four regions in eastern and southern Ukraine that the Kremlin’s troops currently control after UN-condemned votes. Russia will sign treaties to absorb the areas on Friday, Putin’s spokesman, Dmitry Peskov, told reporters on a conference call.