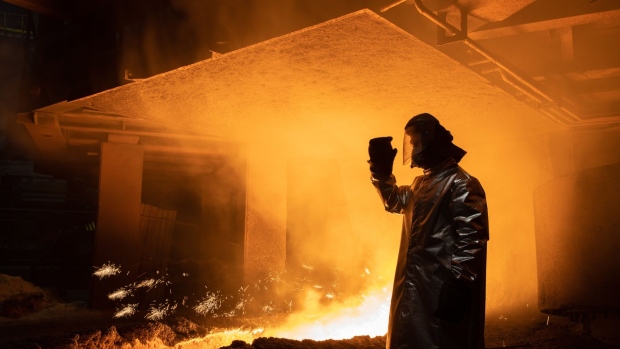 A worker inspects a blast furnace at the Cherepovets Steel Mill, operated by Severstal PJSC, in Cherepovets, Russia, on Friday, Dec. 3, 2021. Even if the recently-identified omicron variant proves less deadly than feared, traders are weighing a weakening growth outlook that could hurt demand for industrial commodities in the months ahead. , Bloomberg

The company said it had received permission by the Russian government to pay in dollars, but believed Citigroup, the paying agent, would block the payment. It was scheduled to make a $12.6 million interest payment on March 16. Spokespeople for Severstal and Citigroup declined to comment.

Severstal’s difficulties paying echo those of EuroChem, another Russia firm struggling to secure clearance for its coupon settlement, in a sign of Russia’s deepening international isolation. On Friday some bondholders of Russia’s sovereign debt reported that they have finally received coupon payments in dollars two days after the due date, but there is deep uncertainty about how Moscow will honor future debt obligations.

Should Severstal fail to make the full payment in dollars by Tuesday, it risks becoming the first Russian company to default on its debt obligations after sanctions were imposed on the country following its invasion of Ukraine.

Severstal’s controlling shareholder and chairman, Alexey Mordashov, was included in the European Union sanctions list because of his connection with Severgroup, which has considerable stakes in Russian media, and Bank Rossiya, which has opened branches across the Crimean peninsula since its annexation. As such he has “benefited from Russian decision-makers responsible for the annexation of Crimea and the destabilisation of Ukraine,” according to the Official Journal of the European Union.

The company’s interest payment is due for holders of $800 million in so-called loan participation notes that mature in 2024. The debt, which pays an annual rate of 3.15%, was issued by Luxembourg-based unit Steel Capital.

Instead of transferring the full amount due, the steelmaker said it would do a test and pay just part of the money it owed to see if it would go through. As of Friday afternoon London time, the payment had not been processed, according to people familiar with the matter who asked not to be identified discussing private information.

Citigroup is acting as the paying agent for both the steelmaker and EuroChem. The fertilizer manufacturer had coupon interest payments due on March 14, but the payment was blocked, Bloomberg reported earlier.