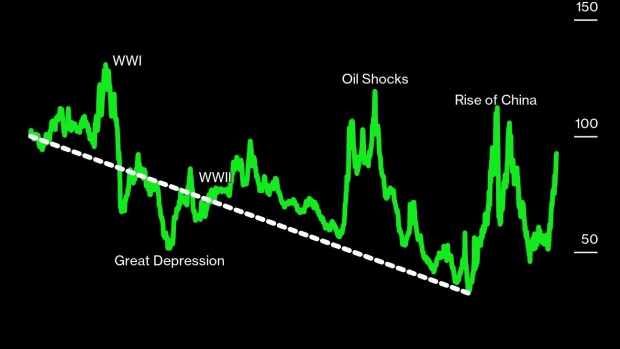 A worker handles wheat grain delivered to the Big Mills of The South flour milling facility in Chouf, Lebanon, on Tuesday, March 29, 2022. Already gummed up by supply-chain bottlenecks, skyrocketing freight rates and weather events, markets are bracing for more upheavals as deliveries from Ukraine and Russia — which together account for about a quarter of the world’s grains trade — turn increasingly complicated and raise the specter of food shortages. Photographer: Hasan Shaaban/Bloomberg , Bloomberg

War broke out at the same time as both interest rates and inflation were rising, with “extremely high asset prices beginning to wobble” and immediate repercussions for energy markets and the agricultural sector, which is dependent on Russia’s potassium and phosphorus.

“The topic I’m interested in here is what I would call hard reality,” Grantham said in an interview with Bloomberg Green.

He describes that reality with decades’ worth of data that show commodity prices steadily until 2000 when they increased. His index of 36 equally weighted commodities “came down 70% in 100 years, only going up really when they had a damn good excuse, like OPEC and World Wars I and II.” With the 2000 to 2022 data tacked on to the 20th-century record, the full index is down only 10%, he said, which is little more than a rounding error.

“You would better describe the chart today as sideways for 120 years,” Grantham said.

Grantham’s latest note puts Russia’s invasion in the context of a large number of interacting, global long-term trends that may already be simmering to a boil. Falling birth rates and eroding productivity make the ongoing resource squeeze that much harder. “You’ll have a GDP that is growing under 1%, compared to a resource price that seems, since 2000, to be rising at a couple of percent or more a year,” he said.

Also, the energy intensity of agriculture and ongoing depletion of soils puts food systems at risk, and Russia’s war isn’t helping. “People are mesmerized by energy and energy is colossally important,” but the increasing strains on access to food may be the most disruptive, he said.

“But all is not hopeless,” Grantham writes. Despite thousands of generations conditioned to focus on short-term survival, he said people are clearly able to protect their well-being, “what is left of our natural systems,” relearn how to value the quality of things rather than their quantity, and most importantly, harness venture capital and university-scale research to invent and commercialize what’s needed for a decarbonized and sustainable world.

“As we enter the new age of environmental damage, scarcity and physical limits, we will need all the innovation and ingenuity we can muster,” he wrote.