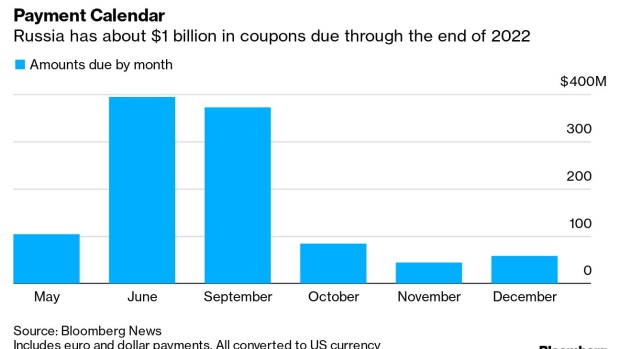 The Spasskaya tower of the Kremlin, center, and Saint Basil's Cathedral, right, in Moscow, Russia, on Tuesday, Feb. 22, 2022. The ruble tumbled the most since March 2020 after President Vladimir Putin recognized self-declared separatist republics in east Ukraine, deepening a standoff with the West. , Bloomberg

(Bloomberg) -- Russia is back in default countdown, with another bond payment in question and the Kremlin fighting to find an escape route.

As of Friday evening, coupon payments in euros and dollars worth about $100 million hadn’t landed in investors’ accounts, kicking off a 30-day grace period.

But late in the day, the main central securities depository in Moscow issued a statement that its account was debited in favor of depositor’s accounts for the funds. Russia’s government last week said payments to the NSD mean it’s made good on its obligations.

All of that capped dramatic week for Russia, which included an unscheduled interest-rate cut designed to stave off a currency that’s too strong, and tougher US restrictions that have compromised its ability to service dollar debt. The ruble was down for a third day, careening from a blistering rally into a sharp drop.

Separately, a creditor committee reconvenes next week to consider whether a missing $1.9 million interest payment on bonds can spark an insurance payout for investors potentially worth billions of dollars.

The nation’s first foreign default since the Bolshevik repudiation of Czarist-era debts in 1918 would seal the country’s lightning-fast plunge into financial isolation after its invasion of Ukraine.

But with war costs mounting, imports collapsing, and foreign reserves still frozen, it might seem strange the government is still trying to pay the approximately $20 billion it owes to foreign creditors at all -- even with billions of dollars from energy exports pouring in each week.

“We will do everything to reaffirm our role as a reliable borrower, even in these conditions,” Finance Minister Anton Siluanov told students Friday at a lecture at the Finance University in Moscow. “If we say, ‘your governments don’t want us to pay you, so we won’t pay,’ these times will pass -- but the memory will remain.”

His comments came two days after the US allowed a key sanctions loophole to expire, effectively ending Russia’s ability to pay creditors in dollars. Russia responded that it would pay rubles instead and bondholders could apply to access the funds.

“Western countries are defaulting on themselves,” Siluanov said. “This is nonsense.”

By the end of the day on Friday, creditors were supposed to receive $71.25 million in interest on debt maturing in 2026 and 26.5 million euros ($28.5 million) on bonds maturing in 2036. Russia said last week it met its obligations by transferring the money to the National Settlement Depository, the main central securities depository in Moscow.

The contractual terms of the notes state that the NSD is the registered holder of the bonds for the purpose of making principal or interest payments. That could support Russia’s argument it’s avoided a default even if the funds aren’t sent to individual investor accounts.

Assuming it can’t squeeze the coupon payments through, Russia has the length of the grace period to find a solution. That’s what happened in early May, when it got money to investors at the very end of the extension after payments were initially blocked.

This time round the Kremlin’s room for maneuver is far narrower without the US sanctions exemption.

“Will the additional pain of a default even be noticeable next to the pain the existing sanctions are already inflicting?” said Dennis Hranitzky, head of the sovereign litigation practice at legal firm Quinn Emanuel. “Russia already lacks access to the western capital markets.”