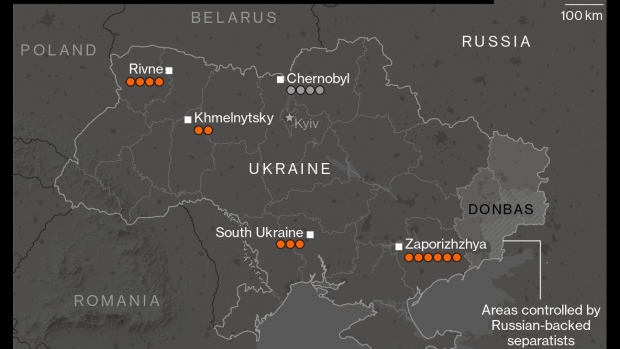 (Bloomberg) -- Russia told the International Atomic Energy Agency that its military had taken control of territory around Ukraine’s Zaporizhzhya nuclear power plant as diplomats hold an emergency meeting to voice their mounting concern over safety as fighting escalates.

Ukraine authorities say they maintain control of the plant itself and that a combat-ready military unit remains within the perimeter. Some residents from the nearby town of Enerhodar erected barricades to the plant, according to multiple online accounts.

The IAEA convened an extraordinary meeting in Vienna on Wednesday, just hours after Russian officials informed Director General Rafael Mariano Grossi that they controlled access to the facility. Zaporizhzhya is Europe’s biggest nuclear power installation. Its six reactors sit on a cape that abuts the Dnieper River with only a single road leading in or out.

“Any military or other action that could threaten the safety or security of Ukraine’s nuclear power plants must be avoided,” the IAEA wrote in a statement. “Operating staff must be able to fulfill their safety and security duties and have the capacity to make decisions free of undue pressure.”

Earlier this week, the head of Ukraine’s nuclear-power utility called on international monitors to intervene to ensure the safety of the country’s 15 atomic reactors.