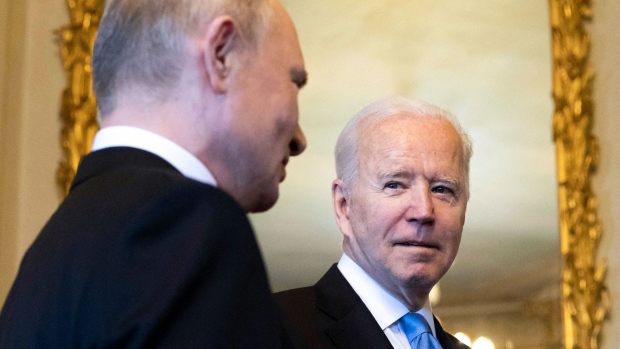 Joe Biden, right, speaks to Vladimir Putin prior to the U.S.-Russia summit at the Villa La Grange, in Geneva on June 16, 2021. , Photographer: Peter Klaunzer/AFP/Getty Images

There’s no agreement yet on timing, though the Kremlin is hoping for a call before the end of the year, according to Putin’s spokesman Dmitry Peskov.

Biden said Friday that he will likely talk with Putin and Ukrainian President Volodymyr Zelenskiy soon.

Though Russia has been talking up possible presidential contacts -- potentially including an online summit via videoconference -- for several weeks, the ruble extended gains against the dollar following reports of the possible dialog Monday.

U.S. Secretary of State Antony Blinken may meet his Russian counterpart Sergei Lavrov in Stockholm Dec. 2 or 3 at a meeting of the Organisation for Security and Cooperation in Europe, Russian Deputy Foreign Minister Sergei Ryabkov said.

The U.S. has shared intelligence with European allies that shows a large-scale deployment of Russian troops and artillery that it says could be a prelude for a push into Ukraine early next year. Putin has denied any intention to invade the neighboring country but said the alarm is evidence that his actions had gotten the attention of the U.S. and other NATO members, whom he accused of failing to take Russia’s “red lines” over deepening Ukraine-NATO ties seriously enough.

The friction between the two former Cold War enemies has increased on other fronts, including a spat over diplomatic representation. Russia’s ambassador to Washington said more than 50 diplomats and their family members will have to leave the U.S. by mid-2022. Ryabkov said Russia would retaliate if the U.S. went ahead with that.