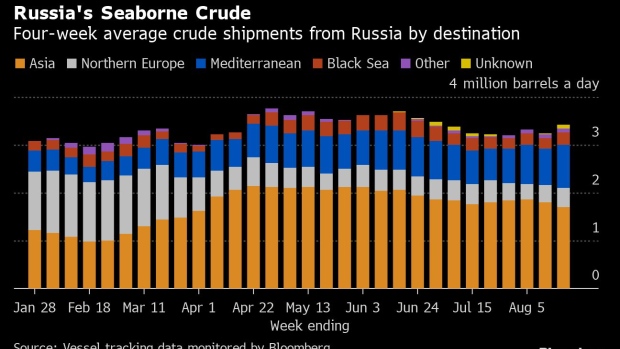 (Bloomberg) -- Russia has approached several Asian countries to discuss possible long-term oil contracts at steep discounts as US officials continue to push a plan that would cap the price of the country’s oil, according to a Western official.

The tentative conversations to offer some Asian buyers discounts of up to 30% may be a sign that Russia is trying to head off discussions by Group of Seven nations about carving out an exception for pending European Union sanctions on Russian oil, said the official, who asked for anonymity to discuss sensitive talks. That plan would allow third parties to more easily purchase Russian crude oil at a low price set by Western nations.

Russia also may be trying to lock in replacement buyers for the oil it’s currently selling to Europe.

Indonesia’s minister of tourism, Sandiaga Uno, said in remarks he posted on Instagram over the weekend that Russia has offered to sell it oil “at a price that’s 30% lower than international market price.” He added that President Joko Widodo was considering the offer, “but there was disagreement. There are fears that we will be hit by US embargoes.”

The EU’s sixth round of sanctions over the invasion of Ukraine includes a ban on Russian oil, as well as the use by third countries of the bloc’s companies for insurance and financial services. That ban takes effect on Dec. 5, but US officials are worried that the current framework would drive up oil prices substantially and deliver windfall profits to Russia.

Read more: US Says Russia Oil Cap Needed as EU Sanctions Not Yet Priced In

Some European countries have backed the idea of carving out an exception to the insurance ban for oil sold under an internationally set price cap, but others have said such a system would only work if significant Asian purchasers of Russian oil, particularly India, agree to participate.

German Chancellor Olaf Scholz said that G-7 nations are discussing the proposal seriously, but that it’s a complex issue and would require the support of other countries to make it work.

“We are working very hard to implement this joint project,” Scholz told reporters earlier this month. “However, it will not work if only the G-7 countries agree on it. There are others who are needed as partners.”

It’s not clear where most Asian countries stand on the plan, but few countries have publicly expressed support. India is reluctant to join the price-cap scheme, since its industry worries it could lose out to other buyers on the chance to buy discounted Russian crude, according to people familiar with the views of Indian firms.

US Deputy Treasury Secretary Wally Adeyemo is in India this week to meet government officials and executives, including in finance and energy, for discussions on energy security, climate finance and clean energy technology.

The coalition for putting a price cap on Russian oil has broadened and a number of countries have joined, Adeyemo said at an event in Mumbai on Wednesday, adding that he was “not going to get ahead of announcements by the coalition.”

Officials pushing the plan would like to get it in place before the EU’s oil sanctions start in early December. Treasury Secretary Janet Yellen has argued that a price cap would deprive Russian President Vladimir Putin of much-needed revenue while keeping oil prices subdued globally as EU sanctions take hold.

Read more: European Buyers Are Snapping Up the Most Russian Crude Since April

G-7 officials are still trying to work out the details of how the price cap would be set, and officials say that transparency will be key. The plan’s backers have argued that even if major countries don’t formally join a price-cap coalition, the arrangement could help drive down Russia’s revenues because those nations would still gain extra leverage with Moscow to negotiate more favorable oil contracts.

“I don’t think it’s an on-off switch,” Jason Bordoff, the co-founding dean of the Columbia Climate School, said in an interview. “It’s more of a linear effect. The more countries that are in the coalition, the more effect it will have. It’s going to be pretty modest if you don’t have the big countries as part of it.”

Another key factor will be at what level the price cap is set. U.S. officials have suggested they intend to fix it slightly above Russia’s marginal cost of production, according to a person familiar with the matter, although the final level would depend in part on the global oil price when it comes into effect.

For the EU to adopt the price-cap plan, the bloc would need to amend its sanctions package, which was only approved after a long and difficult debate last spring.

Hungary, which has maintained closer relations with Russia, held up agreement for weeks as the bloc tried to reach a deal on targeting Russia’s energy sector. Budapest has signaled that it would oppose any oil price cap, according to the person, signaling another potentially awkward political fight.