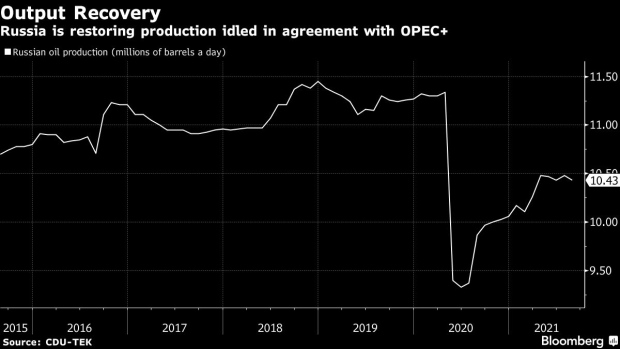 Thick black oil on the shaft of a pumping jack, also known as a "nodding donkey" in an oilfield near Dyurtyuli, in the Republic of Bashkortostan, Russia, on Thursday, Nov. 19, 2020. The flaring coronavirus outbreak will be a key issue for OPEC+ when it meets at the end of the month to decide on whether to delay a planned easing of cuts early next year. Photographer: Andrey Rudakov/Bloomberg , Bloomberg

Russia expects oil output next year to be back near its post-Soviet high as OPEC+ eases production curbs.

Russian companies are seen raising combined production of crude and a light oil called condensate by 8% to 559.9 million tons in 2022, and stay close to that level from 2023 to 2024, according to a draft budget submitted by the Finance Ministry to the government.

The document, which was seen by Bloomberg, requires approval from the parliament and President Vladimir Putin. It sets expectations for budget revenue and spending over the period, but actual figures may differ.

The Organization of Petroleum Exporting Countries and allies including Russia are reviving production idled in the depths of the Covid-19 pandemic. Each month the group will add 400,000 barrels a day to the market, of which about a quarter comes from Russia. The hikes are set to continue until all of the OPEC+ output curbs are rolled back.

The Finance Ministry’s outlook, like the nation’s official oil statistics, do not give a breakdown between crude and condensate. That makes it difficult to assess how the production forecast lines up with OPEC+ deal, which only puts a limit on crude.

Deputy Prime Minister Alexander Novak has said repeatedly that Russia will abide by its OPEC+ target, meaning the nation’s oil output will reach the pre-pandemic level by May 2022.

There have been questions about Russia’s ability to boost production. In August, the country’s oil output declined even as its OPEC+ target increased, after a fire at a Gazprom’s processing plant in West Siberia forced the gas giant to cap condensate production in the area. Russia also showed monthly drops in production in May and June.

The country’s production rebounded in the first half of September, according to data from the Energy Ministry’s CDU-TEK unit, seen by Bloomberg. Russia pumped 1.457 million tons a day of crude and condensate from Sept. 1 to Sept. 15. That equates 10.68 million barrels a day, Bloomberg calculations show, some 270,000 barrels a day, or 2.6%, higher than in August.

The increases mainly came from at Slavneft Oil & Gas Co. OJSC and Bashneft PJSC as well as a gradual rebound in Gazprom’s production, the data showed. If that rate of production is maintained for the whole of September, it would be the biggest monthly increase in Russian output in just over a year.