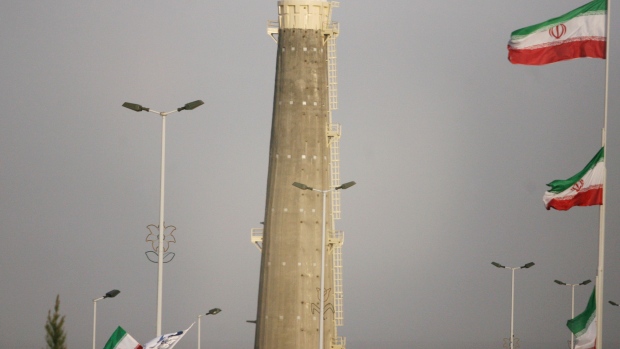 NATANZ, IRAN - APRIL 9: A general view of the Natanz nuclear enrichment facility, is seen on April 9, 2007, 180 miles south of Tehran, Iran. Iranian President Mahmoud Ahmadinejad announced yesterday, April 9, that Iran has stepped up their Uranium enrichment programme, with up to 3,000 isotope separating centrifuges now in operation. The news has brought condemnation from the International Community and the UN. Iran?s top nuclear negotiator Ali Larijani confirmed the scaling-up of activity but declined to elaborate on the subject. (Photo by Majid Saeedi/Getty Images) , Photographer: Majid Saeedi/Getty Images Europe

Russia said Iran and world powers might reach a new nuclear agreement next month. The pact would probably include the lifting of oil sanctions on the Islamic Republic and be put into effect by April, Mikhail Ulyanov, Russia’s main envoy for the negotiations in Vienna, said Wednesday.

“If the talks continue at the pace they’re currently going, in principle it’s quite realistic to reach agreement by the end of February,” he told the Rossiya-24 television channel.

The U.S. and Iran, so far only engaging via other countries’ diplomats, could begin direct talks “rather soon,” Ulyanov said.

Russia had previously indicated that a deal could be struck as soon as this month, while the U.S. and European Union states have said time is running out.

The negotiations are meant to restore a 2015 accord that limited Tehran’s atomic activities in return for sanctions relief, including on oil exports.

Oil dropped from a seven-year high after the U.S. Federal Reserve signaled it would soon start raising interest rates to quell inflation, causing the dollar to rise. Brent fell 0.9% to $89.16 a barrel by 12:50 p.m. in Singapore.

The Iranian nuclear talks are critical for oil traders. If there’s a deal, Iran may be able to raise exports enough that crude prices fall. If not, they could move closer to $100 a barrel.