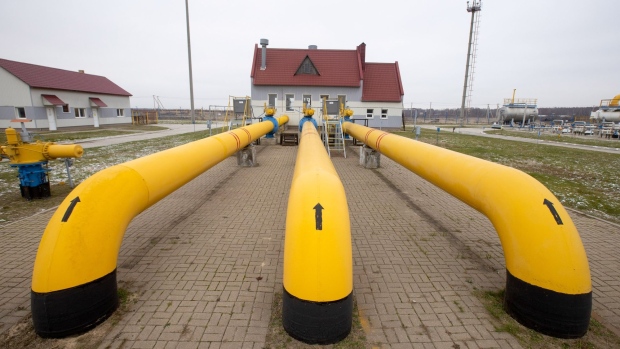 Pipework showing flow direction at the Kasimovskoye underground gas storage facility, operated by Gazprom PJSC, in Kasimov, Russia, on Wednesday, Nov. 17, 2021. Russia signaled it has little appetite for increasing the natural gas it transits through other territories to Europe as the winter heating season gets underway. , Bloomberg

(Bloomberg) -- Russia set out just how much its gas flows to the global market will fall in the next three years -- and the numbers underscore the scale of the challenge facing Europe’s energy consumers.

Russia’s gas giant Gazprom PJSC has been reducing flows to Europe -- historically its biggest market -- for months amid the region’s sanctions over the invasion of Ukraine. Some European customers were cut off after refusing to comply with the Kremlin’s demand to be paid in rubles for supplies. Russia has also cut shipments to the region through major pipelines, citing Western sanctions and technical reasons. That left the region with capped flows via Ukraine and deliveries via the second leg of TurkStream as the last remaining routes for supplies to the continent.

The budget draft doesn’t provide a breakdown of the export markets. However, based on historic data and current flows, Turkey may become the single largest client of Gazprom on the continent. Last year Russia gas producer exported almost 27 billion cubic meters to Turkey.

China could become the second-largest buyer of Russian pipeline gas next year. The deal between Gazprom and China National Petroleum Corporation envisions a gradual increase of supply via the Power of Siberia pipeline to around 21 billion cubic meters in 2023 from some 15 billion to 16 billion this year targeted for this year.

Those figures are subject to change as Gazprom makes the final decision on supplies based on market conditions, client requests, and potentially further escalations of Russia’s standoff with the West.

Russia expects crude exports to increase slightly, despite Europe halting most purchases from the nation. The three-year budget draft projects 250 million tons of crude to be exported next year, up from 243 million tons seen delivered this year, with 255 million tons and 260 million tons to be shipped in 2024 and 2025 respectively.

Shipments of oil products, however, are seen declining to 113 million tons in 2023, from a projected 130 million tons this year, according to the draft.