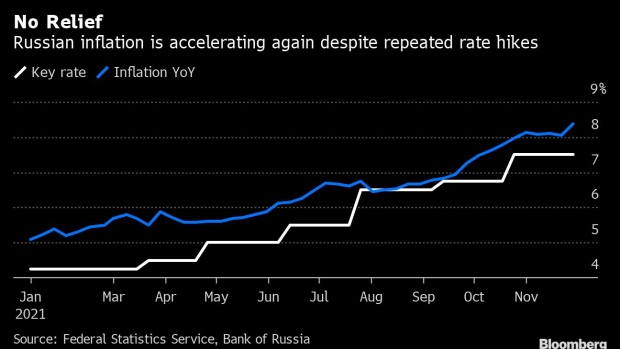 The Bank of Russia signaled a bigger rate increase at next week’s meeting, warning that inflation is likely to run well above target for most of next year.

An increase of 25 basis points, the central bank’s standard increment, “is unlikely,” Deputy Governor Alexey Zabotkin said in an interview with the Interfax news service.

His comment comes just over a week after his boss, Governor Elvira Nabiullina said on Nov. 30 the bank’s board will consider options from a hold to a 100 basis-point increase at the Dec. 17 meeting. At that time, she said a hold was the least likely option.

Since then, inflation has continued to show no sign of slowdown, running more than twice the central bank’s 4% target. November’s figure is expected to come in at 8.35% when it’s released later Wednesday, the highest since January 2016, according to a Bloomberg survey of economists. The Bank of Russia has raised its key rate 325 basis points so far this year, with a 75 basis-point hike at the meeting in October.

President Vladimir Putin on Tuesday said rising inflation is “the main problem for the economy and for citizens” and ordered officials to bring it back to the target next year.

“A full percentage point of tightening next week is marginally more likely than other options. But there’s a lot we still don’t know, and the latest inflation data could decide how big the hike needs to be.”

Zabotkin warned Wednesday that inflation will remain significantly above the target for most of next year, with substantial declines possible only in the fourth quarter.

He said the central bank is looking at inflation data now to determine how much of the price growth is driven by one-time factors versus sustained ones.

“For the December decision, what will be important isn’t so much what inflation will be at the end of December but how the data for October-November as a whole add to our understanding of sustained level of inflation pressure,” he said.