Russia defaulted on its external sovereign bonds for the first time in a century, the culmination of ever-tougher Western sanctions that shut down payment routes to overseas creditors.

For months, Russia had found paths around the penalties imposed after the Kremlin’s invasion of Ukraine. But at the end of the day on Sunday, the grace period on about US$100 million of trapped interest payments due May 27 expired, a deadline considered an “Event of Default” if missed.

The route to this point has been far from normal, as Russia has the resources to pay its bills -- and tried to do so -- but was blocked by the sanctions. Those restrictions also mean there’s huge uncertainty about what comes next, and about how investors can go about getting their money.

“With Russia benefiting from the high price of its energy exports, it clearly has both the means and the desire to pay its foreign debt,” said Giles Coghlan, chief analyst at HYCM Group. It’s a “default in a technical sense, so many investors may be prepared to wait it out.”

Moody’s Investors Service said the missed payments constituted a default under its definition and warned that the government would likely also default on future bond payments. Moody’s and other assessment firms no longer rate Russia due to sanctions.

Given the damage already done to the economy and markets, the default is also mostly symbolic for now, and matters little to Russians dealing with double-digit inflation and the worst economic contraction in years. But still, it’s a grim marker in the country’s rapid transformation into an economic, financial and political outcast. The nation’s eurobonds have traded at distressed levels since the start of March, the central bank’s foreign reserves remain frozen, and the biggest banks are severed from the global financial system. 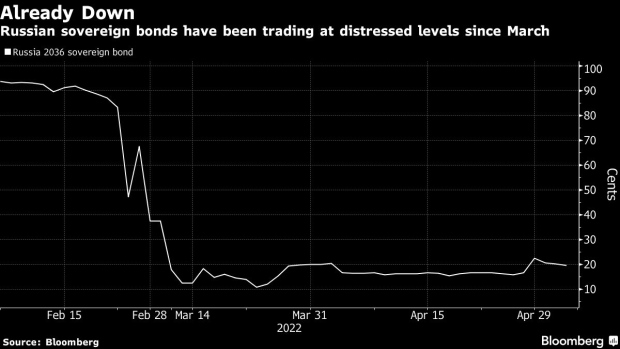 Russia has pushed back against the default designation, saying it has the funds to cover any bills and has been forced into non-payment.

As it tried to twist its way out, it announced last week that it would switch to servicing its US$40 billion of outstanding sovereign debt in rubles, criticizing a “force-majeure” situation it said was artificially manufactured by the West.

At the time, Russia avoided defaulting on its foreign eurobonds, although President Boris Yeltsin’s government reneged on US$40 billion of ruble-denominated debt, and also missed payments on dollar notes issued by state-owned Vnesheconombank.

While those bonds were issued after an agreement with the so-called London Club in 1997 to restructure Soviet-era debt held by Western banks, they were technically obligations of Vnesheconombank rather than the Russian Federation, according to a paper published by the International Monetary Fund. In May 1999 the government also defaulted on a Soviet-era dollar bond, known as the MinFin III that was domestically issued, but was widely held by foreign investors.

According to Lee Buchheit and Elena Daly, sovereign debt lawyers who provided advice to Russia during its 1990s restructuring, while the country did restructure some of its debt then, that didn’t include its Eurobonds at the time. “MinFins, while denominated in dollars, were governed by Russian law and therefore could be viewed as internal debt,” they said.

The last time Russia fell into direct default vis-a-vis its foreign creditors was more than a century ago, when the Bolsheviks under Vladimir Lenin repudiated the nation’s staggering Czarist-era debt load in 1918.

By some measures it approached a trillion dollars in today’s money, according to Hassan Malik, senior sovereign analyst at Loomis Sayles & Company LP.

By comparison, foreigners held the equivalent of almost US$20 billion of Russia’s eurobonds as of the start of April.

A formal default declaration would usually come from ratings firms, but European sanctions led to them withdrawing ratings on Russian entities. According to the bond documents, holders can call one themselves if owners of 25 per cent of the outstanding bonds agree that an “Event of Default” has occurred.

Finance Minister Anton Siluanov dismissed the situation on Thursday as a “farce.”

He also said it makes little sense for creditors to seek a declaration of default through the courts because Russia hasn’t waived its sovereign immunity, and no foreign court would have jurisdiction.

“If we ultimately get to the point where diplomatic assets are claimed, then this is tantamount to severing diplomatic ties and entering into direct conflict,” he said. “And this would put us in a different world with completely different rules. We would have to react differently in this case -- and not through legal channels.” 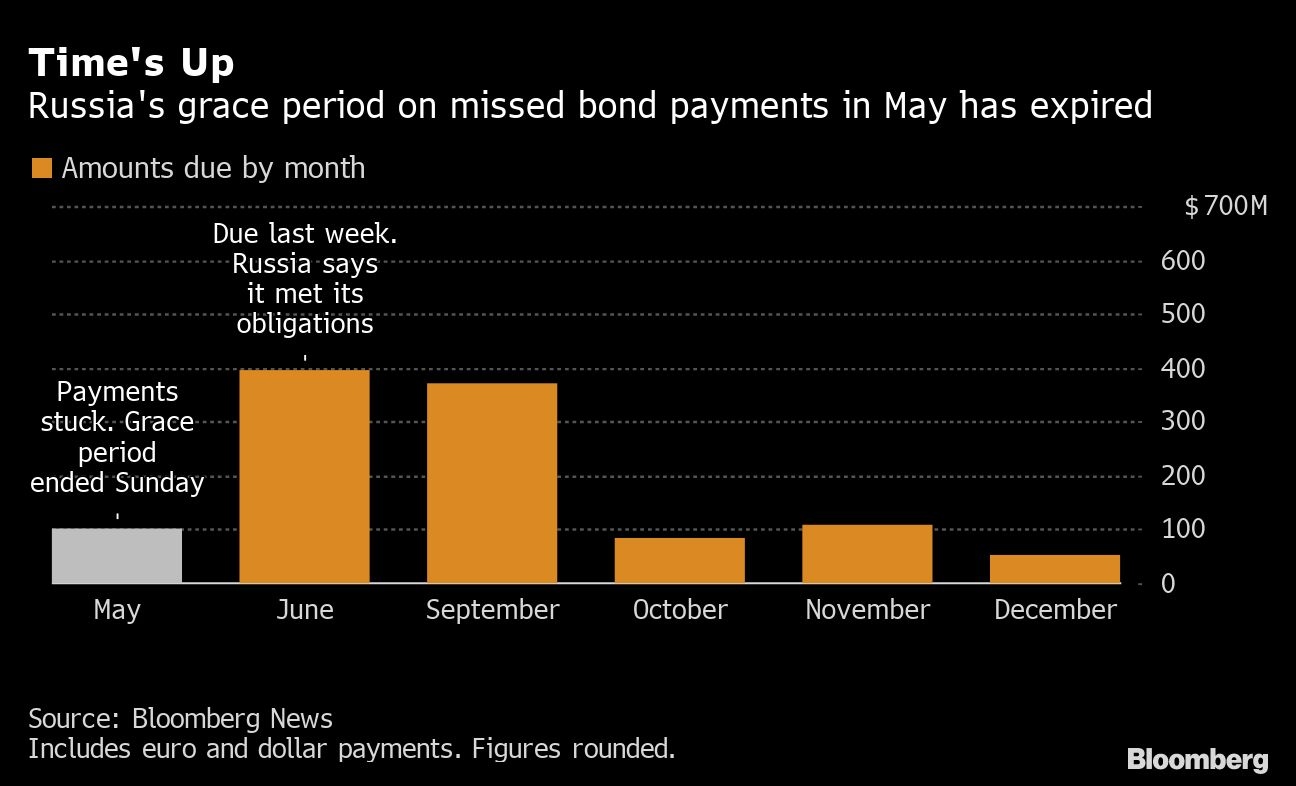 The 30-day grace period was triggered when investors failed to receive coupon payments due on dollar- and euro-denominated bonds on May 27. Bondholders have time to assess the situation: the claims only become void three years on from the payment date, according to the bond documents.

With payments blocked, Vladimir Putin introduced new regulations that say Russia’s obligations on foreign-currency bonds are fulfilled once the appropriate amount in rubles has been transferred to the local paying agent.

The Finance Ministry made its latest interest payments, equivalent to about US$400 million, under those rules on Thursday and Friday. However, none of the underlying bonds have terms that allow for settlement in the local currency.

So far, it’s unclear if investors will use the new tool and whether existing sanctions would even allow them to repatriate the money.

“Is it a justifiable excuse to say: ‘Oh well, the sanctions prevented me from making the payments, so it’s not my fault’?” said Malik, who is also author of ‘Bankers and Bolsheviks: International Finance and the Russian Revolution.’

“The broader issue is that the sanctions were themselves a response to an action on the part of the sovereign entity,” he said, referring to the invasion of Ukraine. “And I think history will judge this in the latter light.”