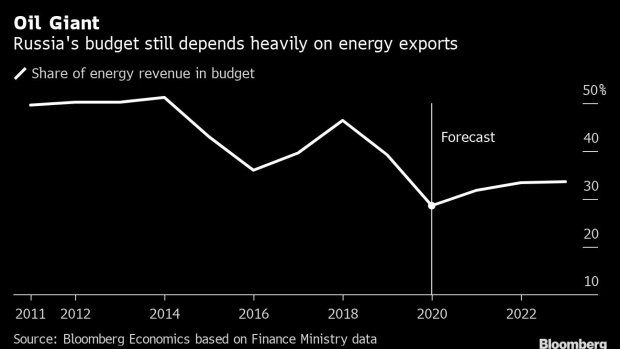 (Bloomberg) -- The Finance Ministry of the world’s biggest energy exporter has started preparing for the possibility of lower budget revenues in case global oil demand declines sooner than expected.

“The peak of consumption may have already passed,” Deputy Finance Minister Vladimir Kolychev said in an interview in Moscow. “The risk is rising in the longer term” that hydrocarbon revenues could come in below the current outlook, he said.

The comments are a rare admission from a senior Russian official that the best days may be over for the energy revenues that drive the economy. President Vladimir Putin said in October that growing demand from Asia will support Russian energy exports in the coming decades and the Economy Ministry forecast in March that oil consumption will peak around 2045.

The Finance Ministry is currently weighing scenarios for different levels of demand, said Kolychev, one of the architects of a mechanism that funnels proceeds from energy taxes into a rainy-day fund. Putin has promised for years to reduce Russia’s dependence on energy, but the sector still makes up a third of budget revenues.

A drop in mobility due to the coronavirus has coincided with increased efforts to combat climate change this year to completely alter the outlook for fossil fuel demand. BP Plc became the first major oil giant to admit in September that oil consumption may never return to levels seen before the pandemic. Since then China and the U.S., the world’s two biggest economies, have stepped up commitments to transition to clean energy.

Read more: The Peak Oil Era Is Suddenly Upon Us

Russia, which generates less than 1% of power from renewables, has so far been slow to adapt to the transition and is still investing in new oil exploration projects in the Arctic. Analysts at Moscow’s Skolkovo Energy Center warned in May that economic growth may be limited to less than 0.8% a year for the next two decades if the country doesn’t adapt.

“Russia’s economy is clearly not ready for a hydrocarbon shift,” said Natalia Orlova, chief economist at Alfa-Bank in Moscow. “The government and business don’t have a clear understanding of what direction Russia should go if it moves away from oil.”