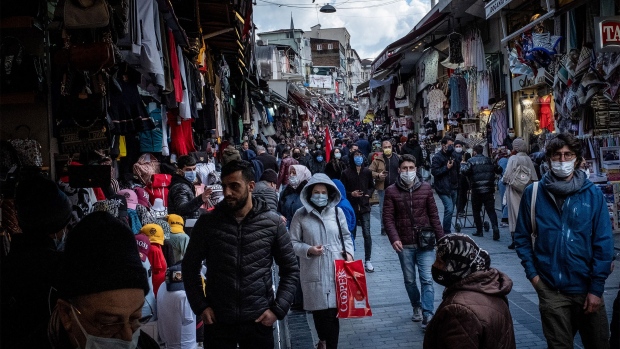 ISTANBUL, TURKEY - APRIL 09: People wearing protective face masks shop ahead of the start of the holy month of Ramadan on a busy market street on April 09, 2021 in Istanbul, Turkey. Turkey announced more than 55,000 new Covid-19 cases in the past 24hrs, a new daily record since the start of the pandemic. Turkey recently lifted restrictions allowing restaurants and cafes to reopen for indoor and outdoor dining during limited hours. Fears are growing that coronavirus cases will continue to rise as the country prepares to celebrate the holy month of Ramadan starting on April 13. (Photo by Chris McGrath/Getty Images) , Photographer: Chris McGrath/Getty Images

(Bloomberg) -- Russia suspended most air travel with Turkey, citing rising coronavirus infections, cutting off a key source of tourism revenue to the country amid tensions over Ankara’s support for Ukraine.

Most charter and regular flights will be suspended between April 15 and June 1, but two flights a week will still run between Moscow and Istanbul, Deputy Prime Minister Tatyana Golikova said in a televised briefing Monday. Fully 80% of the cases of Covid-19 identified in Russians returning from abroad were in people who came from Turkey, public-health chief Anna Popova told the same briefing.

Some 500,000 Russians had booked tours to Turkey over the period, which covers two public holidays, RIA Novosti cited the Russian Association of Tour Operators as saying. Borsa Istanbul’s tourism index declined 6.4% on Monday as rumors spread that flights may be suspended, closing at the lowest level since Jan. 11.

Russia was the biggest source of tourists to Turkey last year, with 2.13 million people visiting despite coronavirus restrictions.

Daily cases in Turkey, the highest in Europe, hit a record 55,941 on April 8. President Recep Tayyip Erdogan is expected to announce stricter social distancing measures after a cabinet meeting on Tuesday.

Erdogan hosted Ukrainian President Volodymyr Zelensky over the weekend amid rising tensions with Moscow over a massive Russian troop buildup near its border with Ukraine. President Vladimir Putin spoke by phone with Erdogan about the Ukraine crisis and the Covid-19 situation the day before.

Kremlin spokesman Dmitry Peskov denied any link between the flight ban and Zelensky’s visit, telling RIA Novosti the move is solely related to the coronavirus situation. Russia also suspended flights with Tanzania on Monday, citing the outbreak there.