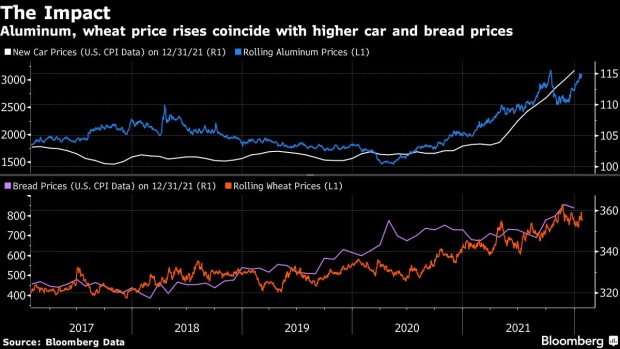 (Bloomberg) -- Commodities are trading at all-time highs, and that could have a wide-ranging impact on the price of everything from new cars to grilled cheese sandwiches.

But it’s also happening beyond energy. Look at wheat and aluminum, for instance. Given that Russia and Ukraine combined make up a quarter of global grain exports, wheat and corn prices have risen on the possibility of a sudden supply crunch. It’s a similar story for aluminum, as Russia is a key producer of the metal.

Looking at the chart, the latest peak in the commodity spot index resembles the move ahead of the 2008 crash, as well as the 2011 food crisis, which was caused in part by a destroyed Russian grain crop.

The moves in these key Russian exports have far reaching consequences for U.S. consumer prices. Whereas oil and LNG has been driving global inflation and largely hawkish pivots in monetary policy, wheat and aluminum will likely hit American shoppers particularly hard, spilling over into things like bread and cars. U.S. CPI data measuring increases in the cost of new autos has mirrored the acceleration in aluminum prices as just one input in their manufacturing. It’s a similar story with bread, which costs more as wheat prices climb.

For investors focused on how a potential Russian invasion of Ukraine will affect European energy prices, it’s worth taking a broader view. Yes, Russia’s 2014 annexation of Crimea didn’t interrupt shipping flows, but this time it could. If nothing else, traders are pricing in that possibility. Russia is a commodity-exporting nation, so any disruptions could have far-reaching consequences for American consumers.