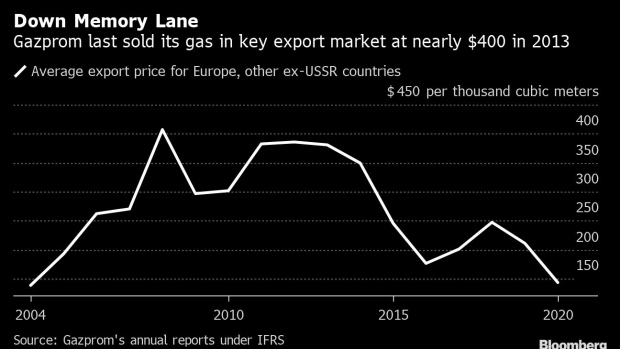 Pipelines stand in front of electricity pylons near OAO Gazprom's new Bovanenkovo deposit, a natural gas field near Bovanenkovskoye on the Yamal Peninsula in Russia. , Bloomberg

Russia wants natural gas prices in top buyer Europe to come down by about 60% in the longer term as a prolonged rally will destroy demand for Gazprom PJSC’s supplies, according to two officials with knowledge of the country’s energy policy.

Russia wants prices in Europe to be about $300-$400 per thousand cubic meters, the sweet spot that would help keep Gazprom keep its grip on the continent’s market, even as nations from the U.K. to Poland transition to cleaner energy sources, one official said. Another official named a range of $200-$400, with prices at the low end being a less acceptable scenario.

That stands in sharp contrast to current benchmark prices in Europe, which have repeatedly surged to record levels in recent weeks amid an energy crunch. Concerns of a supply shortage ahead of winter have emerged, with the continent’s inventories at their lowest seasonal level in at least a decade, pipeline flows capped and competition with Asia for liquefied cargoes.

The Kremlin has been publicly worried about the price rally’s demand-destruction effects on Gazprom, which last year supplied nearly a third of all gas consumed in Europe.

“Such a situation, at the end of the day, is leading to lower consumption, and this will affect our producers, including Gazprom,” President Vladimir Putin said at a government meeting last week. “This is why we are not interested in endless growth of energy prices, including gas.”

Putin and other high-ranking officials have been using verbal interventions to cap European gas prices and and mitigate their volatility. However, Russia hasn’t sent any significant additional gas volumes to the region’s spot market to ease the crunch, citing the need to prioritize domestic storage ahead of winter.

Gazprom’s exports to Europe have been lower year-on-year since late August, with some officials on the continent blaming the Russian producer for contributing to the crisis by intentionally withholding additional volumes. The company says it ships the fuel in line with requests from its long-term clients, and some major utilities in the region confirm they aren’t asking for more due to high prices.

Actual gas prices under Gazprom’s long-term contracts differ from spot prices. In recent years, the share of contracts with price formulas that factor in spot and forward markets has increased substantially. More than 80% of the volumes Gazprom delivers have a direct link to trading hubs, with only 13% linked to oil prices.

The Russian producer last sold its gas to Europe and Turkey at an average price of over $400 per thousand cubic meters in 2008, when contract prices were still largely linked to a basket of oil products. Last year, as gas demand in Europe was hit by a mild winter and the pandemic, Gazprom’s exports price to countries outside the former Soviet Union averaged $143, with the range also including the price of deliveries to China.