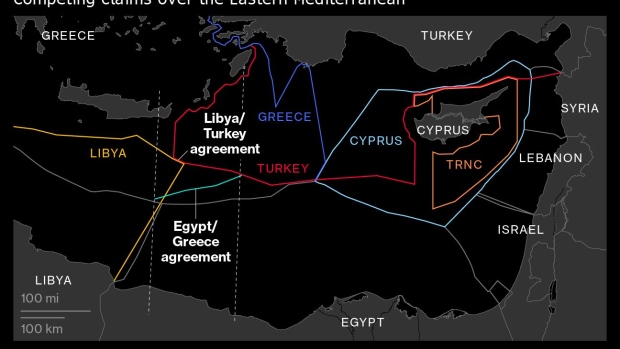 (Bloomberg) -- Russia will hold two naval exercises in the eastern Mediterranean beginning next week, according to Turkey’s navy, a move that could fuel escalating tensions in the energy-rich region.

The Russian navy will hold firing exercises between Sept. 8-22 and Sept. 17-25, a Turkish navy website said late Wednesday. It urged Russia not to interfere with seismic work by Turkish survey ships south of the Greek island of Kastellorizo and off Cyprus’s Karpas peninsula.

The exercises would come after Turkey condemned the U.S. for easing a decades-old arms embargo on Cyprus, saying the move could increase tensions over its territorial disputes with Greece and Cyprus. Ankara urged Washington to reverse course, saying it would otherwise take “reciprocal steps” to safeguard Turkish Cypriot people in Cyprus.

Turkey is at loggerheads with the U.S. and other NATO allies over its purchase of S-400 missile-defense system from Moscow. It wasn’t immediately clear whether Russia was intending to send a message of support for Turkey with the planned exercises in the Mediterranean.

There was no immediate public comment or confirmation from Russia on the maneuvers.

Turkish forces captured the northern third of Cyprus in 1974, following a coup attempt in which a military junta in Athens sought to unite Cyprus with Greece. The U.S. arms embargo was imposed in 1987 to prevent an arms race and give diplomacy a chance to try to reunify the divided island of Cyprus.

Congressional opponents have called it outdated and counterproductive to American security objectives, as Cyprus seeks to deepen its strategic partnership with the U.S. Secretary of State Michael Pompeo on Tuesday announced on Twitter that the embargo had been eased.

The U.S. move comes as the European Union considers further sanctions against Turkey over its energy exploration in contested waters off the eastern Mediterranean -- where Israel, Cyprus and Egypt have discovered substantial reserves of natural gas in recent years.

European diplomats are working to ease strains fueled by conflicting interpretations of maritime boundaries and the feud between Turkey and Cyprus over offshore gas reserves around the island.

The Republic of Cyprus officially has sovereignty over the entire island, though it in effect remains divided.

The Turkish Cypriot minority’s self-proclaimed state in the north -- recognized only by Ankara -- also claims rights to any energy resources discovered off its coast. Ankara has separately vowed to defend its interests in its maritime jurisdiction areas, some of which overlap with those Cyprus declares as its own.

The EU is drawing up a list of possible sanctions against Turkey that might be discussed at a meeting of the bloc’s leaders later this month if there isn’t diplomatic progress toward resolving its disagreements with Greece and Cyprus, EU foreign policy chief Josep Borrell said last week.