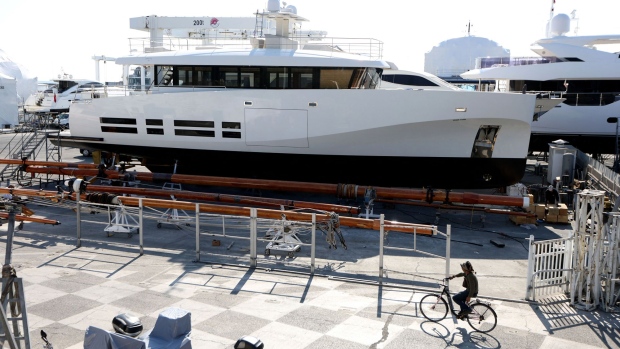 (Bloomberg) -- Sanctioned Russian billionaire Alexey Kuzmichev scored a partial win in his twin lawsuit against France’s customs authority as judges said the raid on one of his two Riviera yachts was unlawful and canceled it.

The Paris court of appeals on Wednesday criticized the “serious errors” made by customs officials during the surprise inspection of “La Petite Ourse” in the coastal city of Antibes, and deemed the mid-March raid “irregular.”

Judge Elisabeth Ienne-Berthelot pointed out that there’s no mention in the customs’ raid report that the captain was informed of his right to oppose the search or any reference to any sanctions-evasion fraud -- which should have been the underlying reason for boarding the vessel. She also said that customs officials failed to indicate in the report the relevant jurisdiction to contest the raid.

Kuzmichev’s attorney Philippe Blanchetier said the ruling “enshrines the primacy of the law” and described the search operation as an “improvisation dictated by obscure political considerations.”

Customs representatives didn’t immediately respond to a request for comment, however at a hearing last month, a customs official said that French law doesn’t even require any prior suspicions of sanctions evasion to search the yachts for traces of a possible attempt to circumvent them.

Despite his partial victory on Wednesday, Kuzmichev is unlikely to be able to move his “La Petite Ourse” yacht as he remains targeted by a Mid-March European Union asset freeze. The billionaire, who is one of the founders of investment firm Alfa Group, lost a separate lawsuit earlier this year where he was trying to overturn the French government’s decision to reveal the location of his Paris home and Riviera villa.

The judges decided on Wednesday that Kuzmichev’s second yacht lawsuit concerning “La Petite Ourse II,” which was also immobilized in March in Cannes, should have been filed at another court, and took no decision on it. It’s now up to a court of appeals in the northern French city of Rouen to examine that second case.

Yachts owned by sanctioned businessmen have been immobilized in ports or naval yards across Europe in the aftermath of Russia’s invasion of Ukraine as authorities attempt to prevent ships from relocating to ports where sanctions don’t apply. In France, authorities have also opened a criminal investigation to determine whether the owner of superyacht Amore Vero -- which has been tied to oil giant Rosneft PJSC’s chief executive officer Igor Sechin -- tried to circumvent sanctions and flee the Riviera.

For more: The Villas That Russians Have Bought on France’s Billionaire Bay