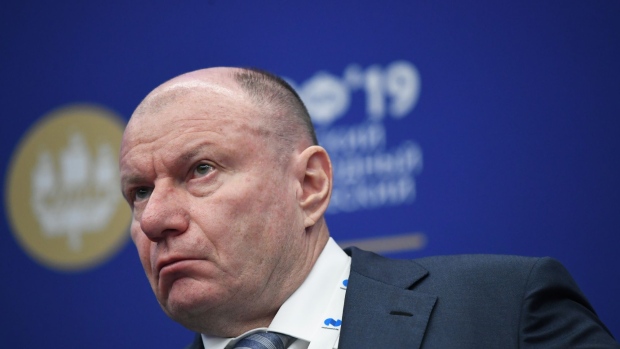 (Bloomberg) -- Vladimir Potanin, Russia’s second-richest man, faces a divorce claim from his ex-wife amounting to 50% of the value of his shares in MMC Norilsk Nickel PJSC -- an award that would run into billions of dollars.

The billionaire’s ex-wife, Natalia Potanina, outlined the maximum amount she is seeking at a London court hearing Tuesday. Potanin owns around one-third of the shares in Norilsk Nickel, according to the Bloomberg Billionaires Index, meaning that the maximum size of the claim could total well in excess of $7 billion. Should a judge make that award it would dwarf the largest publicly known payout in a U.K. divorce.

Potanin is fighting the case after Potanina overturned a lower court that accused her of “divorce tourism.” Potanin is still waiting to hear whether the U.K. Supreme Court will consider an appeal, Judge Nicholas Francis said.

London’s divorce courts have been a popular destination for high value legal fights, with judges typically prepared to order a more equal share of a couple’s assets. The record judge-ordered award is currently 450 million pounds ($631 million) to the wife of billionaire Farkhad Akhmedov, but the two settled with a payment of less than one-third of that amount.

Potanina said that in addition to the Norilsk stock, she would be prepared to accept 50% of all dividends on the shares from 2014. Her former husband has collected some 487.3 billion rubles ($6.6 billion) in dividends since then and has a net worth of $29.9 billion, according to the Bloomberg Billionaires Index. Potanina is also seeking half of the value of a expensive Russian property known as the Autumn House.

Potanina said she received around $40 million following Russian divorce proceedings while Potanin said she ended up with $84 million -- a sum that by English standards is a “paltry award” given the his wealth and the length of their 31-year-marriage, a judge said in a previous decision.

(Updates with calculation of dividends collected by Potanin in fifth paragraph.)