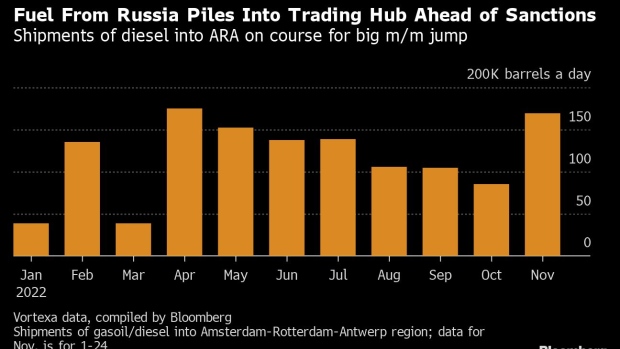 The nozzle of a diesel pump in the gas station at the Hans Engelke Energie OHG depot in Berlin, Germany, on Wednesday, Oct. 5, 2022. For many Europeans, the key concern during the current energy crisis is doing whatever it takes to stay warm in the coming months. , Bloomberg

(Bloomberg) -- Europe continues to lean heavily on Russia as a source of diesel with fewer than ten weeks to go until sanctions all but block the trade -- a stark reminder of the work that still needs to be done to find new supplies.

The European Union and UK received almost half their waterborne imports of diesel-type fuel from Russia in the first 24 days of this month, Vortexa Ltd. data compiled by Bloomberg show. The level of reliance jumped sharply from October, when the region’s overall imports surged to cope with strikes that knocked out French oil refining capacity.

Overall, tankers delivered an average 1.34 million barrels a day of diesel-type fuel during Nov. 1-24 into the EU and UK, according to Vortexa data. That’s sharply down from October, but still higher than the average for the first 10 months of the year.

From Feb. 5, EU sanctions will all but cut-off seaborne imports of diesel and other refined products from Russia. The country is still by far the bloc’s single biggest external supplier, meaning buyers face a sharp crunch unless they can source more barrels from elsewhere to fill the gap.

The EU and UK received about 600,000 barrels a day of diesel-type fuel in shipments from Russia during November 1-24, 45% of total arrivals. In October they took 34% from Russia and the average for the first 10 months of the year was 51%.

Exports from the Baltic Sea port of Primorsk made a dramatic recovery last month, and are set to rise even higher next month.

A notable amount of the total Russia waterborne product is going into the Amsterdam-Rotterdam-Antwerp area, northwest Europe’s oil trading hub.

December is the final month that traders of ICE Gasoil -- Europe’s main diesel futures market -- will be allowed to deliver physical Russian fuel into storage locations in the ARA region through these contracts.

That potentially creates an incentive for anyone looking to sell Russian barrels through these futures contracts to get it done. Come January, Russia-origin product will be banned from ICE Gasoil delivery.

See also: European Diesel Dives to Contango for 1st Time Since Before War

Other importers of diesel shipments from Russia include France, Germany and Poland.

While Europe is under pressure to find alternative supplies, Russia also needs to identify new homes for its exports: in September, more than half went to the EU.

Turkey is also a significant buyer, along with Morocco and Tunisia.

Naphtha is a petroleum product that can be used either to make gasoline, or, as a feedstock in the petrochemicals industry.

Fuel oil, essentially a leftover from the refining process, has multiple potential uses, including to generate power and as ship fuel.

Russia’s total shipments of oil products this month are on course to hit their highest on a barrels a day basis since February, when the invasion of Ukraine began.

Not all Russia-made fuel is always exported from the country’s ports -- some can be shipped via other countries and is not included in the statistics used in this article.

--With assistance from Prejula Prem.