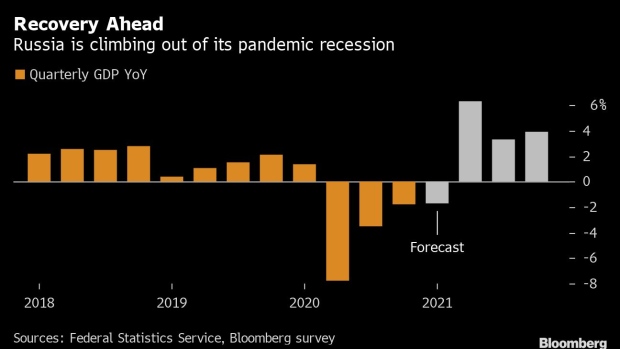 Shoppers inside the Aviapark shopping center, Russia's largest shopping mall, in the Khoroshyovsky District of Moscow, Russia, on Friday, Nov. 27, 2020. A worsening Covid-19 outbreak is threatening Russia's economy with another contraction, after a swifter-than-expected rebound in 3Q. Photographer: Andrey Rudakov/Bloomberg , Bloomberg

(Bloomberg) -- Russia’s economy continued to rebound from its pandemic-induced recession in the fourth quarter of 2020, easing its contraction as President Vladimir Putin opted against imposing a second national lockdown.

Gross domestic product declined 1.8% from a year ago, the Federal Statistics Service said Thursday. That was less than the median forecast of economists for a drop of 2.2%. The full-year contraction was revised to 3% from 3.1%, the service said, also updating previous quarters.

The economy of the world’s largest energy exporter contracted less than many of its peers last year as Russia imposed lighter Covid-19 restrictions following an initial lockdown. Its service sector is also relatively small as a share of output.

Inflation, sparked by rising global food prices and the ruble’s weakness, accelerated further amid a recovery in consumption, prompting the Bank of Russia to raise interest rates for the first time since 2018 last month, with further hikes likely.

“Some of the strength in GDP at year-end looked fleeting, and risks from the virus and sanctions certainly remain high. But more timely data suggest Russia’s recovery has actually gained momentum since the fourth quarter.”

Russia’s government is winding down pandemic support measures while also planning to boost infrastructure spending this year, including by tapping its $182 billion wealth fund. Finance Minister Anton Siluanov said money from the fund could start flowing in the first half of this year, totaling 1 trillion rubles ($13 billion) over 3 years, or about 1% of Russia’s total output.

At current oil prices, the economy may expand about 2.5% this year, according to Alexandra Suslina, a budget specialist at the Economic Expert Group, a Moscow think tank.

“The economy is slowly recovering,” Suslina said. “Spending from the wealth fund will lift the economic indicators, but won’t bring Russia to a new level of growth. It will be a short-lived impact.”

The ruble’s weakness and the surge in inflation are putting further pressure on Russians’ deteriorating living standards. Real disposable incomes are still about 10% below levels reached before Putin’s 2014 annexation of Crimea that triggered international sanctions.

The government has resorted to price controls on certain food staples to try to rein in inflation, which rose in February at the fastest pace since 2016. Consumer-price growth reached 5.8% as of March 15, the central bank estimated.

While countries across Europe are experiencing a third wave of Covid-19 infections, pushing some governments toward new lockdowns, Russia continues to ease restrictions as recorded cases decline. Still, an official campaign to encourage mass vaccination has produced little public response so far.

Despite Putin ordering the start of the program in December, only about 4.3% of people in Russia have had a first dose of vaccine, compared to 11% in Turkey, nearly 30% in the U.S. and almost 50% in the U.K.

“While the percentage of the vaccinated population remains low, Russia will remain at risk of a damaging third wave that could hurt recovery prospects,” said Tatiana Orlova, an analyst at Emerginomics in London. “The population’s vaccine hesitancy is, in my opinion, a substantial risk to the near-term economic outlook.”