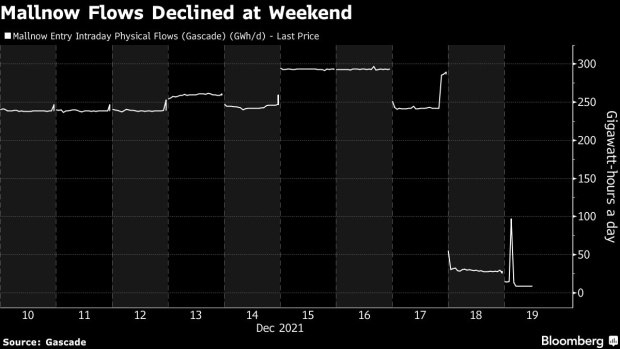 (Bloomberg) -- Russia’s gas shipments through a major transit route to Germany are set to remain capped on Monday, potentially worsening Europe’s energy crunch just as a cold snap arrives in the region.

Just a fraction of pipeline space was booked in auctions on Sunday to flow gas into Germany through Belarus and Poland, according to data from the Regional Booking Platform. The bookings signal supplies via the Yamal-Europe link could remain limited on Monday after plunging over the weekend.

Only 4% of capacity was allocated to send the fuel through Germany’s Mallnow station, where Russia’s Yamal-Europe pipeline terminates. That compares with about 35% of capacity that Russia has booked for most days this month. Russia has also opted against booking extra pipeline capacity to flow more gas through Ukraine on Monday.

European temperatures are forecast to briefly dip below seasonal norms at the start of the week, putting further strain on Europe’s storages sites that are just 60% filled -- a record low for this time of year.