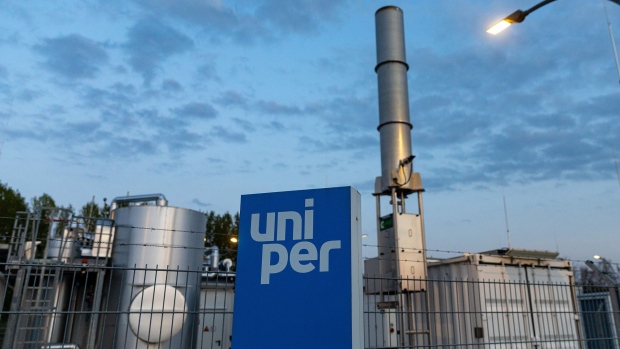 (Bloomberg) -- Energy giant Uniper SE is discussing a possible bailout from the German government after Russia curbed natural gas deliveries, forcing the utility to buy fuel in the spot market at higher prices.

Uniper said it is in talks with the government for a possible increase in state-back loans from KfW or even equity investments to secure liquidity. The supply squeeze prompted the company, Germany’s top buyer of Russia gas, to withdraw its outlook for the year.

Gazprom PJSC has been delivering only about 40% of the contracted volumes since mid-June, according to Uniper. That crunch is being felt across Europe as countries including Italy and Austria also reported receiving less gas than ordered. Futures have jumped more than 40% in the past two weeks.

“Since Uniper cannot yet pass on these additional costs, this results in significant financial burdens,” the company said. “There are also major uncertainties regarding the geopolitical situation, as well as the duration and scope of Russian gas supply restrictions.”

Earnings for the first half of the year will be “significantly below” a year ago, the company said.

Uniper was already facing a liquidity crunch even before Russia’s war in Ukraine, with wild price swings forcing the company to borrow $11 billion to pay down margin calls.

(Updates with quote in third paragraph)