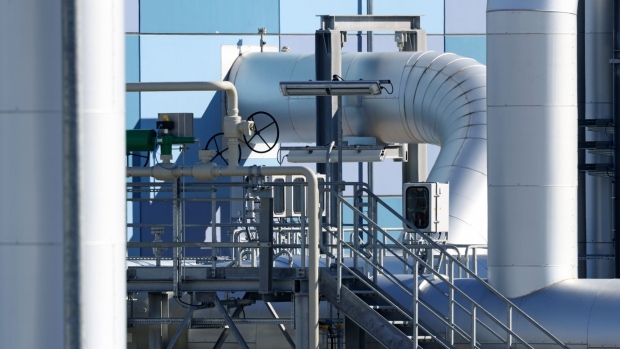 A valve wheel on pipework at the Radeland 2 compressor station for the European Gas Pipeline Link (EUGAL), a downstream pipeline for Nord Stream operated by Gascade Gastransport GmbH, in Radeland, Germany, on Friday, March 11, 2022. The European Union, which is dependent on Russia for about a third of its gas consumption, laid out measures this week to wean the region off Russian supplies this year but any immediate disruption would have widespread economic consequences, with soaring wholesale prices crippling industry and sending inflation even higher. Photographer: Liesa Johannssen-Koppitz/Bloomberg , Bloomberg

(Bloomberg) -- Germany’s banks would be forced to put extra funds aside to cover a potential spike in defaults if the country were to get cut off from Russian gas, several senior bankers said.

The scenario would lead to a recession in Europe’s largest economy and require lenders to back up corporate loans with more capital, BNP Paribas Germany head Lutz Diederichs said Monday at a conference in Frankfurt. He echoed comments made by Commerzbank Chief Financial Officer Bettina Orlopp published over the weekend in an interview with the weekly Focus Money.

Lenders are particularly concerned about planned maintenance work on the main gas pipeline connecting Germany with Russia as there is a chance that supplies won’t resume as before once the work is completed, said two top bankers who asked not to be named discussing the deliberations. The pipeline is slated to be shut down between July 11 and 21 for maintenance.

German banks’ provisions for the potential economic consequences emanating from the war on Ukraine have so far been lower than the large reserves they built at the height of the pandemic. But the country is heavily reliant on continuing gas imports from Russia, and a complete loss of access to the energy supply would deal a heavy blow to the economy.

Deutsche Bank Chief Executive Officer Christian Sewing said such an event would force “a deep recession,” at the same event on Wednesday.